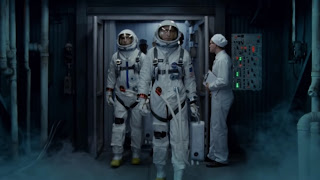 Out-of-this-World Astounding, an Intimate Look into One of America’s Iconic Figures.

**** (out of ****)
Humanity’s greatest collective achievement was, perhaps, to put man on the moon. Maybe the manned mission to Mars, currently scheduled for the decade after next, will surpass it, but the innovative forward-thinking it took to take that one small step that was also a giant leap is perhaps the current paragon of human intellect. In First Man, the burden of this significance is placed upon one man in particular: Neil Armstrong, who also happened to attain status as the first man to walk on the moon. Director Damien Chazelle’s film examines what this meant to Armstrong – as an astronaut, as a father, and as a man.

And, well, it’s complicated, to say the least. As an astronaut, the prospect of going to the moon means years of preparation, of simulations, of practice flights gone awry, and of hours upon hours of study. There is an intimacy in the way Chazelle and screenwriter Josh Singer (adapting James R. Hansen’s book First Man: The Life of Neil A. Armstrong) immerse us in the mundane details of the process to get an aircraft into space without breaking apart, killing the pilots, and potentially grounding the whole process. “We fail down here, so we don’t fail up there,” is how Armstrong puts it at one point.

The opening scene, a dizzying simulation (abstractly edited by Chazelle regular Tom Cross) meant only to disorientate viewers and to put them on edge, certainly illustrates Armstrong’s point. It is 1961, and the flight that will put Armstrong (Ryan Gosling), Buzz Aldrin (Corey Stoll), and Mike Collins (Lukas Haas) on the moon is still eight years away. The major narrative thread of the film follows Armstrong into space for the first time on Gemini 8 with Dave Scott (Christopher Abbott), his involvement in various missions to include the doomed Apollo 1 mission (in which three pilots, played in the film by Jason Clarke, Shea Whigham, and Cory Michael Smith, died in a test-launch fire), and, finally, the moon landing itself in July 1969.

Chazelle, with the accompanying help of Cross and cinematographer Linus Sandgren, approaches the flight sequences as intentionally disorienting and removed from the usual sense of awe we feel when dealing with space in movies. That is confined specifically to Armstrong’s running, leaping, and jumping tour of the moon’s surface, captured with reverence, humor, and a keen sense of the loneliness of the moment. Smartly, the filmmakers provide the recreation of the landing against the backdrop of archival audio, meaning that the famous proclamation Armstrong made upon descending from the ladder of the craft is made by Armstrong himself in voiceover.

As a father, we get a brief glimpse of his early years with wife Janet (Claire Foy), in which the pair endure the death of a daughter to cancer and celebrate the birth of two sons who, later, will worry that their father won’t return from his mission. These sequences are often gutting, especially because Foy’s performance is strong enough to elevate the usual “worried partner” material that accompanies movies of this sort. The worry goes far beyond Janet herself, and the outcome of this marriage, with its foundation in reality, is far bleaker than people might have known, given the legend of the story.

That, ultimately, is the point of Chazelle’s film: to strip away the mythic legacy of the journey and, in the process, locate the man at the center of it. That brings us to the film’s examination of Armstrong as a man, which is often during quiet sequences of reflection. Gosling’s performance is exceptional because the actor, skilled at conveying a lot without needing to express it, understands that Armstrong was a man of stoicism, patience, and, to a fault, solitude. Consider the moment Armstrong learns of the Apollo 1 crash or the moments before the capsule doors open onto the lunar landscape.

First Man is filled with lovely, intimate moments like this, and it is also filled with the sound and fury of the astronautical process. In other words, it deftly covers the range of feelings one has when witnessing a truly great movie, and Chazelle makes the whole thing look too easy. Tense and tender, grand and intimate, the film is an ode to technological advancement, scientific progress, and the intelligence of a people who looked up at the stars, wondered what was out there, and had the fortitude to find out. It is also the story of one man who finds himself at the center of it all and says, when he is told he will command a crew to do so, a simple “Ok” that contains multitudes.
(Review by Joel Copling)