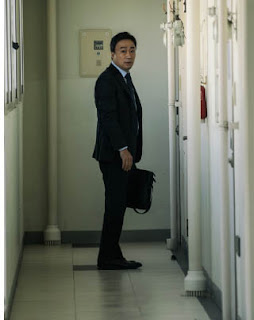 Director Jo Kyu-Jang’s film, “The Witness,” a South Korean thriller released in its home country last summer, begins with a driver (Kwak Si-Yang) pulling into a gas station. It’s late at night and the car is the only vehicle there. The lone attendant approaches the car, told by its driver to fill the tank. As the man fuels the car, there comes a bump, barely loud enough to be heard over the driver’s music and the rushing sound of the gas flowing out of the pump. The bumping becomes louder, more insistent. The driver turns up the stereo while the attendant peers nervously at the car’s trunk. The camera zooms in on the trunk, moving through the steel to reveal a woman, bound and gagged, desperately trying to get anyone’s attention.

“The Witness” is a film that seems more interested in relating some social commentary with its fable-like narrative than telling a plausible story. The gas station attendant is only the first of this film’s characters to brush aside this woman’s cries (in this case, bumps) for help.

The captor drives his victim into the woods. There, he digs a hole. Somewhere along the way the woman has managed to work her way loose from his bonds and springs out as he opens the trunk, knocking him down and running for her life.

Screenwriter Lee Young-Jong eventually comes to settle the story on foolish businessman Sang-Hoon (Lee Sung-Min), who has the unfortunate honor of witnessing this woman’s brutal murder in his apartment complex’s courtyard. Sang-Hoon’s complex is apparently located right at the edge of the woods the killer and his victim were in. As he stands watching the murder, his wife turns on the living room lights revealing to the murderer that he’s being watched.

What follows is a bunch of nonsense. Instead of phoning the police, Sang-Hoon becomes convinced that filing a report will mean death for him and his family. Exactly why he feels this way is never revealed. Matters aren’t helped by the complex’s community leaders who ask their fellow residents to sign a form stating that they will not talk to the media or the police. Their reason - the coverage will lower their housing’s value - about as nonsensical as Sang-Hoon’s decision to not go to the police. Wouldn’t it be better to have the crime solved rather than live in an area with an unsolved one?

The only reasoning for any of their behavior seems to be making a commentary on society’s tendency to face the other direction instead of lending a helping hand. Conveying this point is blatantly more important to Young-Jong over telling a coherent story.

Attempts at tense sequences are well-handled by Kyu-Jang. But while they are technically proficient, they are devoid of any thrills due to the implausibility of the situations. The investigating detective (Kim Sang Ho) continually attempts to question the complex’s residents, starting to focus on Sang-Hoon due to recognizing that the man knows more than he’s letting on. In one of these scenes, the killer is standing nearby and the idiotic Sang-Hoon still doesn’t say anything. It also turns out that there were other witnesses whose identities the killer somehow discovers.

The film builds to a ludicrous climatic brawl in the forest between Sang-Hoon and the killer. Not much else made sense so why should the ending? As a whole, “The Witness” is a rather terrible film, saved only by its well-handled cinematography, though that doesn’t make this one worth checking out.
(Review by Bret Oswald)