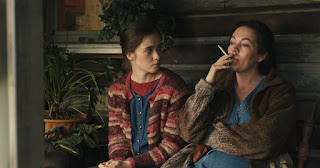 Writing/directing duo Britt Poulton and Dan Madison Savage set their feature “Them That Follow” deep within the Appalachian Mountains. There, Mara (Alice Englert) lives with her father, Lemuel (Walton Goggins), the community’s pastor and leader. The people in the community are almost all devout members of a Pentecostal sect whose members believe in baptism by fire rather than water. In this case, the fire is the church’s collection of venomous snakes used for patrons to prove their faith or ask for forgiveness. Members must drape one of these poisonous serpents around themselves in search of God’s forgiveness, his answer found in whether or not they are bit and, if bit, whether or not they survive the bite.

In the film’s opening moments, Mara and her friend Dilly (Kaitlyn Dever) are seen going to a nearby convenience store run by another high-ranking member of the community’s religious group, Hope Slaughter (Olivia Colman). In the blink of an eye, Mara hides a box beneath her shirt, returning to the counter to check out with a more innocuous item as her reason for visiting the store. Her real reason – to swipe a pregnancy test, which confirms her suspicions. She’s pregnant.

To please her father, Mara, in line with their religious customs, has agreed to marry the dully devout Garret (Lewis Pullman) though her true affections lie with her friend, Augie (Thomas Mann), Hope’s son. Augie seems to be the lone local that wants nothing to do with the sect, biding his time until he can leave. Hope, her husband Zeke (Jim Gaffigan), and the rest of the community have apparently given up trying to force their beliefs on him. Augie’s lack of faith keeps him from being an eligible spouse for Mara in the eyes of her father.

Unfortunately, Augie is the father of Mara’s child. This fact becomes apparent shortly after the movie begins. Hope’s role in the community is to check the girl’s “purity” before allowing them to marry their betrothed. The religion focuses on the subservience of its women. In one scene, Mara is forced to wash Garret’s feet to atone for a wrong doing. Soon, Mara’s transgression – her pregnancy – is revealed. What happens when the community discovers who the real father is?

For the most part, “Them That Follow” is a finely handled movie. Its photography looks good, capturing the drabness of the characters’ surroundings. While the editing is mostly good, there are a few scenes that are oddly sequenced together. Later portions of the scene are intercut with shots meant to establish it. These out-of-order moments don’t add anything to the film, other than needlessly calling attention to themselves.

The actors work well as an ensemble. They make their tight knit community into a believable world, one whose seemingly happy inhabitants are, more than likely, controlled by a few, kept in line through their shared fear of God. No performance stands out as either good or bad. The actors are there to service the script.

It’s here that most of the film’s problems lie, not that Poulton and Savage’s script is necessarily a bad one. Classified as a thriller, “Them That Follows” lacks the defining characteristic of that genre – thrilling the audience. Even the moments involving the snakes do little to elicit a reaction from the viewer. The story’s narrative direction is obvious, in part due to too much being revealed in the film’s introductory scenes. It might have served the story better to leave the viewers in the dark about some elements until later in the story.

While Poulton and Savage do a good job ingraining the viewer into the society they’ve created, the movie winds up feeling more like a melodrama than a thriller. There’s no sense of dread and no building tension, just a nonchalant presentation that flows to the film’s inevitable conclusion. While other viewers may find more to like here, it was a little stale for my taste.
(Review by Bret Oswald)

Posted by Dallas Movie Screenings at 8:59 AM