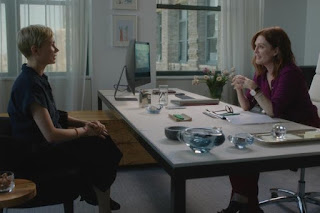 Writer/director Bart Fruendlich’s movie “After the Wedding,” adapted for English-speaking audiences from the Academy-Award nominated film “Efter Brylluppet” directed by Susanne Bier, is one of those films that’s better watched with little to no knowledge of its plot. It’s a movie that seems to be going in one direction before abruptly switching gears, taking a simplistic story and removing its outer shell to unveil the layers hidden beneath the surface.

The film opens with an establishing shot that comes to focus on Isabel (Michelle Williams) meditating with a group of children. Isabel is an American who has settled in India, finding fulfillment in her role as an orphanage director. When her colleague Preena (Anjula Bedi) receives a letter requesting that Isabel come to New York City to meet with a prospective donor, she initially refuses. The orphanage, having trouble gathering donations and supplies, needs money but Isabel doesn’t want to leave, wishing to send Preena in her place. At the insistence of the donor, she finally relents, reluctantly accepting the invitation due to their trouble gathering funds.

Here, “After the Wedding” introduces viewers to the donor, Theresa Young (Julianne Moore), a self-made millionaire. If it’s not apparent from the way Isabel and Preena discussed this mysterious benefactor with each other before her introduction, these are two women who are seemingly polar opposites. Isabel is presented as earthy (calm, serene, content with her life and her work) whereas Theresa is shown to be an enterprising business woman. She’s introduced as she handles a business call, firmly and surely giving out her instructions before just as assuredly shifts her focus once she’s with her twin boys, Otto (Azhy Robertson) and Theo (Tre Ryder), and her artist husband, Oscar (Billy Crudup).

Isabel has arrived in New York City on the day before Theresa’s daughter, Grace (Abby Quinn), is to be married to one of Theresa’s rising young executives, Jonathan (Alex Esola). The always-insistent Theresa convinces Isabel to attend. Grace and Jonathan’s wedding winds up being the catalyst that takes the film in its new direction.

The script is well-thought out, exploring the different angles and motivations of the characters but it’s this same characteristic that causes the movie to have poor pacing. “After the Wedding” seems to be moving toward a conclusion multiple times before it finally does reach its end. Just as it seems Fruendlich is wrapping things up, another plot point is expanded upon. This often causes scenes to feel repetitive. Although they might be presenting something for the first time, it’s not something that hasn’t already been implied.

Fruendlich inserts a bird motif throughout the movie. Theresa finds a damaged bird’s nest complete with cracked eggs by a fallen tree on her property and Isabel often refers to birds when talking with Jai (Vir Pachisia), a young boy living in the orphanage who she has bonded with, offering a metaphor for the two central characters. The frequency with which it is inserted causes the metaphor to feel shoe-horned into the picture, perhaps inserted to make the film feel deeper.

The actors do a fine job with their portrayals though at times they can veer into over-acting, causing a handful of the film’s scenes to come across as forced. Michele Williams is best among the cast, finely conveying her character’s emotions and drive. Abby Quinn is also quite good, showing a character who’s at a vulnerable stage in her life, realizing that her decision to get married might not have been the right one. While Moore’s performance is mostly good there is a scene between her and Crudup at the film’s conclusion that should have been left on the cutting room floor, a distractingly forced scene attempting to deal with their shared grief.

“After the Wedding” is a film that unfortunately overstays its welcome, ending on a shot that mirrors that of the opening. Initially compelling before dissolving into overwrought drama, this is a story that’s not as tightly told as it could be, meandering its way to its conclusion.
(Review by Bret Oswald)

Email ThisBlogThis!Share to TwitterShare to FacebookShare to Pinterest
Labels: After the Wedding review, Bret Oswald