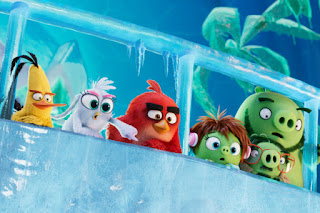 The war between the inhabitants of Bird Island and Piggy Island continues in the animated sequel “The Angry Birds Movie 2.” That is until the green pigs that live on Piggy Island discover the existence of a third island. As the saying goes, “the enemy of my enemy is my friend” and, since the third island, Eagle Island, is also attacking Bird Island, the pigs call a truce, allying themselves with their former enemies in order to find a way to stop the attacks.

Unsurprisingly, “The Angry Birds Movie 2” is a film that will, almost entirely, solely catch the attention of younger viewers. It’s another loud, in-your-face animated comedy. As with almost any animated work these days (at least those coming from the major production studios), the animation from Sony Pictures Animation looks fantastic. Bright and colorful, it pops off the screen. This screening was not in 3D although the trailers advertise that option as being available. It seems like that format is (sadly) pretty much dead by this point. As a trend, 3D comes and goes (the 1950s, 1980s, this current – and longer-lasting – trend). For better or worse, this suggests there might be another rebirth of the format in some future decade.

Eagle Island is ruled by the maniacal purple feathered eagle Zeta (Leslie Jones). Zeta is sick of living on the frozen land of Eagle Island with her daughter, Debbie (Tiffany Haddish), and her many cohorts, who she likes to torture by freezing them whenever they displease her. She sets her sights on chasing off the residents of Bird and Piggy Island with hopes of moving to their tropical locations. The ice angle is played up a lot by director Thurop Van Orman. Zeta’s method of attack is launching giant ice balls. Her pet dog is trapped in a cube of ice, mysteriously able to breathe, eat, and go to the bathroom. Debbie wears cubes of ice on her feet like a pair of shoes.

It’s a cartoon, expect the ridiculous.

Red (Jason Sudeikis), star and hero of the previous movie, is recruited by pig Leonard (Bill Hader) to form a group to infiltrate Zeta’s compound. The rest of the group is made up of birds: Bomb (Danny McBride), Chuck (Josh Gad), Silver (Rachel Bloom), and Mighty Eagle (Peter Dinklage); and pigs: Courtney (Awkwafina) and Garry (Sterling K. Brown). They are a motley group of characters, each with their own specialty. The ego-driven Red and Leonard fight over leadership. Red hopes to save the day in order to keep his new-found popularity, granted following the events of the first movie. Silver, Chuck’s genius sister, is the brains of the operation, offering a threat to the insecure Red. Red is forced to learn to work as part of a team to stop Zeta.

There’s a subplot thrown in involving a group of three hatchlings who manage to lose one of their mother’s three unhatched eggs. Other than unnecessarily increasing the movie’s length, the subplot adds nothing. You’d think the screenwriters (Peter Ackerman, Eyal Podell, and Jonathan E. Stewart) would at least find a way to tie these characters satisfactorily into the conclusion. They don’t. While the hatchlings do wind up at the final fight, their inclusion is pretty insignificant. The main story and its resolution would have stayed the same without them.

Mostly, the jokes are pretty bland. They just aren’t funny, barely causing a crack of a smile, if anything. Although the movie’s humor is terrible overall, there are a couple of jokes that do successfully land. One of which, spoiled in the film’s trailer, involves the birds disguising themselves in an eagle costume. It ends up falling into the potty humor category but it’s cleverly handled. The other (fleetingly brief) moment comes at the ending, almost right before the credits start.

You probably know if you’re going to end up watching this one or not. It looks nice on the surface but is pretty much cold and bland, something made to further cash-in on an established franchise. Animation fans may like looking at the imagery, but this movie doesn’t have much else to offer.
(Review by Bret Oswald)