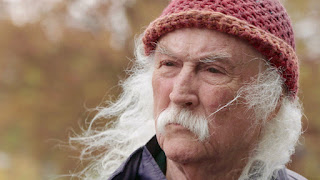 David Crosby is a complicated survivor of the 60's. The legendary songwriter harmonizer in CSN & CSNY (Crosby, Stills, Nash and Crosby, Stills, Nash & Young) has been there and done that and still standing, yeah, yeah, yeah. At 77 years old, he's still performing because in his words it's all he has left to contribute to the world. If given a choice of just staying in his beloved home or music, he picks music. Today his former band mates have a contentious relationship with him after 45 years of putting up with his self professed stubborn and ornery self. After three heart attacks, diabetes, liver transplant, drug addiction and a stint in prison, Crosby has come to terms with all his foibles and he's the first one to tell you that he's an @sshole. Directed by A.J. Eaton and produced by Cameron Crowe, Crosby takes us on a road trip while he recounts his scenes of success and sorrow.

His time with the Byrds yielded some radio hits, including their rendition of Dylan's Mr. Tambourine Man. During the Monterey Pop Festival he filled in for Neil Young for the Buffalo Springfield performance. The Byrds fired him after that mostly because the political rant he did on stage. Plus he was insufferable. Big ego, no brains and goofy. So he borrowed money from the Monkee's Peter Tork and bought a sailboat which he sailed writing songs and finding a bit of calm. Crosby says he was one of the first to live in Laurel Canyon (see Echos of the Canyon for more stories of the musical magic that was created there). The jamming sessions with Steven Stills led Mama Cass of the Mamas and the Papas to recommend Graham Nash of the Hollies to add another layer to the harmonies. Their subsequent performance at Woodstock was their second only time playing together. The amazing talent of each member resulted their becoming American's first Super Group.

Crosby's first instinct on becoming a musician was the women. He became quite the womanizer. Until he met Christine Hinton who was to be the love of his life. After she was killed in a car accident he spiraled down in a haze of drugs. He admits that he got all his girlfriends hooked on drugs too. It became unbearable for the group to continue as he would be performing on stage totally stoned. They would break up, do their independent projects and get back together, until they just couldn't do it anymore. Even his best friend Graham Nash was fed up. They had created the best harmonies but after awhile he could not even face him on stage. To this day he has yet to mend those fences.

Today, Crosby still performs and his voice is still strong. He faced all his demons and admits to it all. His reflections are honest and unforgiving. This doc shines a light on some of the crazy years of our music history. Even if you didn't get to witness first hand, it's worth it for even the Millennials whose love for old is new.
(Review by reesa)