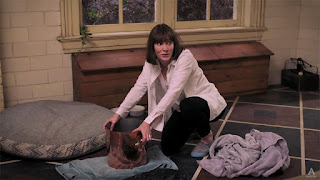 The title and trailer for director Richard Linklater’s latest film, “Where’d You Go, Bernadette,” suggests a different film than the final product. For those who have read the book (I have not, though I do have a copy sitting in my massive to-read pile), this probably isn’t a surprise, depending on how closely the film follows the book. Cate Blanchett’s Bernadette Fox – simultaneously passionate, anxiety-riddled, and exhibiting manic behavior – is always front and center. This story, based on the bestseller by Maria Semple, isn’t a comedy centered around a literal disappearance but rather a metaphysical one, the disappearance of a woman’s personal identity and sense of self rather than her physical being.

Once a rising star of the architecture field in the Los Angeles area, Bernadette now lives with her husband Elgie (Billy Crudup) and daughter Bee (Emma Nelson) in a run-down house in the Seattle area. Linklater uses Seattle’s climate, frequent rain and dark grey skies, to match his lead character’s depression. The state of their house, dilapidated with an overgrown yard, full of buckets to catch water from the leaky roof, raises the first mystery of this film. Why has this family not fixed up the house? This is answered as Bernadette’s past is revealed throughout the film.

Their neighbor, Audrey (Kristen Wiig), a helicopter mom who busies herself at the children’s school, finds the house an eye-sore, frequently badgering Bernadette to get up to snuff with the appearance of the rest of the neighborhood. There’s really no way to do a plot synopsis of this without ruining large portions of this movie. What’s probably best to say is that Elgie is worried about Bernadette’s mental state and has now decided that waiting for her to snap out of it is out of the question. As the family prepares for a trip to Antarctica, resulting from a promise made to Bee, things reach a state where they can no longer be ignored and Elgie calls in a psychologist, Dr. Kurtz (Judy Greer), to aide in an intervention.

“Where’d You Go, Bernadette” is a clunky work from Linklater. The film is oddly paced, stuttering along slowly in large swatches and springing smoothly along in others. Bernadette goes on frequent rants that often feel like they’ve gone on forever, continuing on long after the point has been made. At least one of these sequences is compellingly edited together, showcasing Crudup’s Elgie unloading to the psychologist as Bernadette rants and raves to a former colleague played by Laurence Fishburne.

These characters are mostly all insufferable people. The type of people you’d probably actively avoid if you were to meet them in real life. Linklater and the actors don’t manage to make them into likable people. Cate Blanchett often seems like she’s on the verge of going overboard in her portrayal of Bernadette, who she presents with an odd-sounding accent. Large parts of the film are left to be conveyed by newcomer Emma Nelson’s grating voice-over work.

Strangely, despite all these negatives, the film ends on a positive note, satisfactorily closing off the narrative in a fulfilling manner. Even though these are not people I particularly liked, it felt good to see them reaching a happy resolution. Although the movie is badly paced, the rewarding finale makes it worth the effort. Save this as one to rent once it’s released on disc or streaming.
(Review by Bret Oswald)