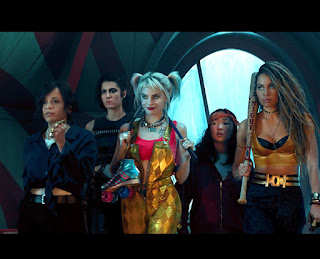 “Birds of Prey” nailed it!
Warner Bros. have finally figured out how to impress the audiences and critics by wanting a nice, clean plot unlike the previous DC films that got into a rocky start of the DCEU franchise. Surely, filmmakers don’t make Superhero films just to woo the fans and audiences, they make movies to discover the people (or characters) in their livelihood. And that’s how the origins of any character can connect to the film’s plot and the cast. The film features the return of Margot Robbie from Suidcide Squad, reprising her role as Harley Quinn/ Harleen Quinzel. The film also stars Mary Elizabeth Winstead, Jurnee Smollett-Bell, Rosie Perez, and Ewan McGregor. Birds of Prey also introduced Ella Jay Basco in her acting debut in a motion picture film.

Birds of Prey tells the story of Harley's life after she broke up with the Joker. Later throughout the film, she focuses on her own post-Joker lifestyle of living before joining forces with the Black Canary, The Huntress, and the police detective Renee Montoya to protect the foster girl named Cassandra Cain under the threat from the criminal mastermind, the Black Mask.

Birds of Prey (more formally known as Birds of Prey and the Fantabulous Emancipation of One Harley Quinn) puts the characters into their separate places in their perspective career roles: we have Perez playing the as a tough police cop, Smollett-Bell as the club singer and (somewhat) a spy, Basco as the child theft, Winstead as the female hunter with a mad, strong martial-art skills, and of course, the movie has Ewan McGregor as Roman Sionis, the club’s owner and a criminal mastermind whose personality, insane-driven, and power-hungry ambition later transformed him into the Black Mask.

With the director Cathy Yan on board, Yan basically knows the nuts and bolts on how to craft this film into a colorful work of art. Yan understands what every aspect from every character should learn when it involves putting much violent contents each other to add comedy in the background, build bridges to avoid messy gaps on the way, and learn about having a good time of their lives even if it means by teaming up despite their misfit personalities (akin to Guardians of the Galaxy films, but only females, which is one of main influences for this film as a whole).

What can be refreshing is that Margot Robbie's Harley Quinn character breaks the fourth wall to shuffle the events of the order of the film, giving the audience more structural details, put off-beat humor to its place, and gathering information on how the film flows based on the characters and the action. Similarity, the style, the familiarity, and the comparisons came from the Marvel's Deadpool films, which they cannot be missed. But if anything stands in the way, both Deadpool/Wade Wilson and Harley Quinn focus on the fourth-wall jokes via commentary about the superheroes, making Birds of Prey a perfect choice to be Deadpool’s roommate as well as being placed in the superhero genre rather than just a action-adventure genre in that matter.

One thing that can’t be missed is that the entire ensemble delivers their assigned troupes, with Harley proving the jars of Looney Tunes-flavored energy and personality she has gotten to make this film incredibly funnier and enjoyable. While that’s taking care of, supportive actor Ewan McGregor, who is given a meatier role from the director, and his partner star Chris Messina are doing their best to provide a strong, funnier role with much comedic dialogue.

With the colors, the pacing, the slapstick, and the laugh-out-loud flavored scenes present, Birds of Prey is an awesome movie (of as if anyone can say “the great chick flick”). This certainly proves why Harley Quinn has become such an endearing, beloved character in the pop-culture phenomenon. I certainly enjoyed this film with a big bucket loads of sugar-crazed laughter on the edge of my seat. Birds of Prey really let DCEU back on its feet and pave the way to the top. With the cast, the direction, and the humor embracing together, the future of DCEU looks bright, a stint compared to the Disney Renaissance era and Marvel Cinematic Universe. If you can’t figure out what movie to see the most, I guarantee, Birds of Prey is worth the price of admission.