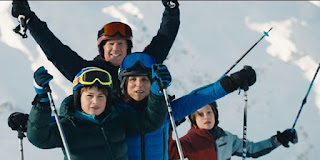 “Downhill” is a dumbed down Americanized version of Ruben Östlund’s vastly superior 2014 film “Force Majeure.” Adapted by screenwriters Jesse Armstrong, Nat Faxon, and Jim Rash, with Faxon and Rash also directing the movie, “Downhill” finds a married couple, Pete (Will Ferrell) and Billie (Julia Louis-Dreyfus), and their two children going on a ski vacation in the Alps. One of the first things the family experiences on their trip is an avalanche. While Billie hunkers down trying to protect the children, Pete scurries off making sure to grab his cell phone. This starts a debate inside Billie as she contemplates on her husband’s commitment to the family and drastically alters the family’s luxurious getaway.

To start on a positive note, Louis-Dreyfus is fantastic in her role. She gives the character and her emotions depth, making her experience and resulting actions believable for the audience. The character of Billie is the glue that holds this movie together because, to be quite honest, not much else works in the movie’s favor.

Will Ferrell has given some excellent dramatically comedic performances over the years, look at “Stranger Than Fiction” or “Everything Must Go,” but that’s not the case here. His performance feels out of balance with the tone of the rest of the movie. He’s not as outlandishly goofy as he usually is but he’s also not as restrained as he should have been. Pete feels like a low-key take on many of Ferrell’s past roles. Louis-Dreyfus’ performance doesn’t mix well with Ferrell’s, making Ferrell feel miscast.

Then, there’s Miranda Otto’s character, Charlotte. She’s a pill. Charlotte is cartoony to the extreme with a penchant for discussing sex. There’s a similar character in the original but what’s handled deftly there and seems to enhance the narrative is handled crudely here becoming an annoying distraction. Her character feels even more out of place than Ferrell’s Pete, especially with her ridiculous accent and broken English.

“Downhill” feels the need to go in some unnecessary directions with its storytelling. “Force Majeure” is a nuanced work with a natural flow to it that feels like it just happens to be funny, at times. Faxon and Rash’s movie feels like its only goal is to make the audience laugh (at that it doesn’t always do a particularly good job, though there are some funny bits). “Downhill” strips the storyline of “Force Majeure” down to its bare essentials. It simplifies the narrative to its base elements and removes the philosophical tone that director Östlund instilled in his movie. At least Faxon and Rash have the decency to make their version of the story short, the film isn’t even 90 minutes long.

Perhaps the biggest detraction in this remake is that the filmmakers don’t have confidence in the intelligence of their audience. Things that are left implied for the European audiences are flat out stated here, ensuring that the viewer knows exactly what these characters are thinking and doing. Louis-Dreyfus is the only thing that makes this version worth watching.
(Review by Bret Oswald)