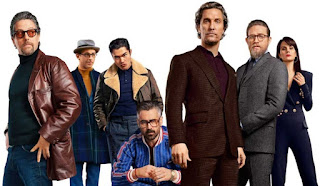 “The Gentlemen” shoots a fiery, yet unforgettable adventure.

The Gentlemen is the latest British action-crime film from the exquisite director Guy Ritchie who takes on the director-pin ship to helm this wonderful, crafty, comedy adventure. Not only Ritchie uses his experience from his Sherlock Holmes films (starring Robert Downey Jr.), but he also uses the 2019 films Once Upon a Time…in Hollywood, The Irishman, and Knives Out as part of the inspiration for the film, but more British-style like the James Bond films. He, as usual, stuffs The Gentlemen with several contemporary actors Matthew McConaughey, Charlie Hunnam, Henry Golding, and supportive actor Hugh Grant appearing together.

In the film, Mickey Pearson (Matthew McConaughey) is American expatriate who becomes rich by selling drugs and building up marijuana empire in London. But when the word spreads about him cashing out of business, it leads to an array of plots and schemes from those scavenging vultures who want to take their hands on his fortune.

What Guy Ritchie did as the director of the film is to bring the classics from these three 2019 films (mentioned above) and put them altogether to build up the climaxes and the plotline that fit the film’s storylines really well and cunning for the audiences and critics’ amusement. Ritchie have produced the ill-fated King Arthur: Legend of the Sword back in 2017, though he later made it up to helm the remake of Disney’s Aladdin and The Gentlemen right here. He even puts his Hollywood directing-style techniques to the test by including quick scene cuts, onscreen titles, and extensive voiceover with a little breaking-the-fourth-wall reference.

Not only the film itself is well thought out, but the actors have been studiously ornamented sleazed up with flashy, fancy outfits to represent the manhood of British-English etiquette. Even when the long, screen time-consuming performances and action sequences are remarkable and ambiguous, those actors look like they they’re having the time of their lives. And lastly, the relationship between the actors Grant and Hunnam have more romantic chemistry than McConaughey and Dockery do.

And let’s not forget, what is surprising is actress Michelle Dockery (Downton Abbey) have stolen the spotlight as the sexy, spy woman-esque wife of Matthew McConaughey’s character and the fact that Hugh Grant’s character revealing that the entire storyline of the film is actually a movie pitch to Miramax, which really brings the whole idea for the director to reveal that The Gentlemen is a film-within-a-film.

The Gentlemen is a great movie, I heavily enjoyed every action sequence there is compared to Knives Out and other crime, mystery films. Let me say this, The Gentlemen looks a bit Oscar/Golden Globe worthy due to the screenplay, the marketing, the actors’ performances, and the plotline overall. The four actors Matthew McConaughey, Charlie Hunnam, Henry Golding, and Hugh Grant did a really great job to keep up with their character Ritchie have always wanted. I must say it’s a must, no muss, no fuss.