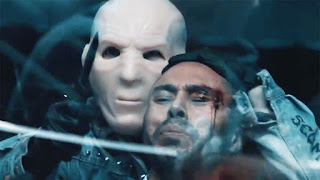 In director Pedro C. Alonso’s “Feedback,” Jarvis Dolan (Eddie Marsan), the host of a politically angled talk show for a London radio station, has been having more than a bit of trouble lately. He’s been abducted – a confusingly included, and vaguely detailed, plot point that doesn’t contribute anything to the main plot – and now, the radio station’s manager, Norman (Anthony Head), wants him to reteam with his past hosting partner, Andrew Wilde (Paul Anderson). Andrew and Jarvis have had a falling out and are not on the best of terms. Following a heated discussion, Jarvis reluctantly agrees to the reunion, telling Norman that Andrew can appear on the show later that night.

Things take another turn for the worse when Jarvis goes live on air and, shortly thereafter, the recording studio is secretly taken hostage by a pair of masked men, armed with a sledgehammer and a shotgun. They force Jarvis to continue the show but with their own planned script, threatening bodily harm to him and his techs if he tries anything. There are more than a few problems with this setup. How did these guys get into the studio unnoticed, especially with all these weapons? It can’t be that easy to carry a sledgehammer past the building’s security guards. Jarvis has already been kidnapped this week, now he can add being taken hostage to his list of woes – two unrelated incidents in one week, it’s a bit over-the-top as far as set-ups go.

Written by Alonso along with Alberto Marini, “Feedback” leaves a lot to be desired. Why has Jarvis’ show been taken over? Are the hostage-takers unhappy about the content or is something else going on? It’s soon revealed that the hostage-takers have an agenda. They want Jarvis to get Andrew to confess about an event years in his past. The necessary involvement of Andrew is one thing that really bothered me about their plan. How did they know Andrew was going to be on the show that night? Jarvis apparently had no idea. This is the type of movie that asks you to blindly go along with it.

For the majority of the movie, Alonso makes Jarvis the sympathetic character. However, Alonso abruptly tries to switch the audience’s sympathies in the film’s finale, flip-flopping the victim and the victimizers and making the movie’s motives questionable. How are we supposed to switch our sympathies after what we’ve just witnessed? Can we fully believe either party’s story? This script could have used some more work.

Despite the obvious problems, Alonso handles the material with skill. “Feedback” is a taut, tightly constructed thriller that’s shot with a sure hand. The action is laid out well and easy to follow and the acting is excellent. All things considered; I didn’t really like this one. With some better writing this would have been a much more effective movie.
(Review by Bret Oswald)