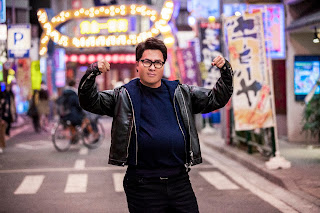 Fans of Donnie Yen will be amused by his newest departure from his iconic role as Ip Man. It is a sort of remake of a 1978 film of the same name staring Sammo Hung. It was directed by veteran stuntman Kenji Tanigaki from a script by Wong Jing, Lui Koon-nam and Ronald Chan Kin-hung. Instead of Sammo Hung's pig farmer, Yen is a Hong Kong cop who has a reputation for causing trouble. Due to the recent coronavirus crisis the film opened on streaming services in China and select theaters in the U.S, but unfortunately not in DFW.

Yen plays Fallon Zhu who describes himself as a 145 lb policeman is engaged to Chloe (Niki Chow) his actress girlfriend of 10 years. The day he is supposed to meet her at the photographer's studio for their pre-wedding pictures, bad guys come in to rob the place. As a cop, Fallon gives chase and the heavily armed robbers wreck havoc in their escape. There's a very cool inventive fight scene involving a van. Afterwards his very angry bosses have him reassigned to the evidence room. Chloe has also had it with him putting himself in danger trying to right all the wrongs and breaks up with him. After he breaks a leg in a bike accident, he spends his heartbroken recuperation time eating junk food and watching Bruce Lee movies. Even after he gets back to work his weight balloons to 250 lbs.

His boss sends him to escort a porn director being extradited to Japan. On the plane he runs into Chloe who is doing some celebrity work. She barely recognizes him. Fallon is met by sleazy toupee wearing cop and a Chinese interpreter (Jessica Jann and Naoto Takenaka). They get their charge delivered, but then he escapes. The Yukuza wants him as he had videoed some incriminating footage. Fallon's boss sends him to a former cop Thor (played by director Wong Jing). He's been in Japan 10 years as he's in love with a restaurant owner (Theresa Mo). She is in trouble with some gangsters to pay back a loan. Fallon helps break up the attack. In order to find the missing director, Thor and Fallon end up at the Fish Market where Chloe is helping open a new business which happens to be owned by the main gang boss. Another fight ensues this time involving a forklift.

In all the convoluted plot twists, Chloe finally realizes that she is still in love with Fallon despite his weight gain. In any other movie the fat shamming would be considered to politically incorrect and insensitive. In this case, Fallon manages to kick@ss and get the bad guys despite his extra poundage. It's a fun to watch the comedic squabbles between the two couples. And it's nice to see the women taking a more aggressive role in the battles rather than the usual passive positions of the damsels in distress. Yen is delightful as Fallon, a far cry from his serious and deadly characters. Hopefully this will open in Dallas, or find it's way to Netflix soon.
(Review by reesa)