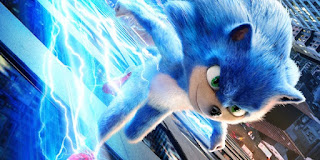 Speed-up Sonic the Hedgehog!
After an outrage over the original Sonic design in the first trailer, Paramount and the filmmakers made a heavy decision on pushing the film’s released date back much further in order to redesign Sonic. Based on the video game franchise produced by Sega, Sonic the Hedgehog serves as a directorial debut for director Jeff Fowler and stars Ben Schwartz as the voice of Sonic while supportive actors Jim Carrey and James Marsden appear in the film. Also appearing is actress Tika Sumpter (ABC’s One Life to Live) who portrays as the wife of Marsden’s character.

Here’s a little brief background for the director Jeff Fowler, he was the director of the 2004 animated short film Gopher Broke, for which he was nominated Best Animated Short Film Oscar, and was a visual effects artist for the 2009 feature film Where the Wild Things Are.

Sonic the Hedgehog focuses on the anthropomorphic blue hedgehog named Sonic who can run faster at supersonic speeds. However, the biggest conflict is that he is on the run from both Dr. Robotnik (portrayed by Jim Carrey), a mad scientist and inventor who is obsessed with capturing Sonic for his world domination plans, and the U.S. government. As means of escaping and avoid captivity, he meets and is assisted by the town’s police officer named Tom (James Marsden) who decides to help him from being captured and used by Dr. Robotnik.

Sonic the Hedgehog features a comedic and nicely-done dialogue and interaction between a CGI-paced character and the live-action characters. With many different approaches, Fowler uses the similarities and the resemblances from the Sonic’s character abilities by revisiting a plethora of retro-style games produced from the 1980s to 2000s as part of the film’s dynamics. Fowler also makes his story structures more concrete but makes the story much more fun and enjoyable for the kids. Another thing is Fowler adds a small load of movie references that involves speeding as another inspiration for the film. Lastly, what is surprising is that the director leaves a little cliffhanger at the end, judging by the mid-credit scenes in the end, reminding the audiences that the future of Sonic will happen.

As a voice actor, Ben Schwartz is trying his best to strengthen his character, even if it means providing plenty of smiles, smirks, and laughs. He also brings much character development based on the video games whilst performing motion capture on the set. While Schwartz’s energy is still going, two supportive actors Jim Carrey and James Marsden are doing the best they can under Fowler’s presence to bring the energy and nifty aspects of their slow-pacing performance and cues.

More importantly, the redesign of Sonic has been built perfectly with much CGI, the pacing, the movement, and the visual effects based on what the audiences saw from the second trailer. Fowler made the right decision for him and the filmmakers to tirelessly work all day and night to fix Sonic as well as making his move on every scene, place, and action sequence. It takes much time, effort, commitment, dedication, hard work, and determination to repair the whole mess.

Although there is some lack of character development for Marsden and Carrey right there. Marsden didn’t provide much support for his Tom character and the relationship with Schwartz’s Sonic while Carrey didn’t provide much enough comedy and slapstick performance to make the film easier to digest. Not to mention, the plot twists are not so abundant, although the action sequences are enjoyable, but somewhat corny. Also, there isn’t much characters from the Sonic games that appear in the film as this meant to be a Sonic solo film. Even the CGI-handcrafted Dr. Robotnik’s robots in the film aren’t even helping to match the outlook from the game.