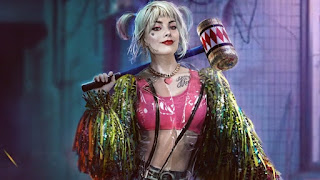 This one was a delicious ride throughout the lengthy running time.

Margot Robbie reprises her role as Harley Quinn, the young doctor and former boyfriend of the Joker (Jared Leto) who does not even make an appearance in the storyline/plot here. This marks her first appearance as the character since her role in the so-so director David Ayer’s “Suicide Squad” from 2016. I think I gave it a grade of B- when it originally came out.

The audience is treated to her adoption of a hyena named Bruce, who resides in a metal bathtub in her kitchen. She and the aforementioned Joker broke up, so Harley is now flying solo.

What makes the movie excel most of all is the action choreography. It does not feel rushed, but just used as a right-set adjusted placeholder.

So readers know, this is a DC comic book film. They have improved since the annoying “Green Lantern” (2001), quite a few years back..

For instance, Harley Quinn goes into a police station and disarms various individuals with via a bean bag shotgun, that blows up with multi-colored and confetti sprinkles flying all over the place. They are not all dead, rather maimed in some form or fash
ion.

Mary Elizabeth Winstead is a character known aa Huntress, a woman seeking revenge on those who vanquished her entire family from the planet. Her part has some depth, since her justification is just due and appropriate for the role.

O the allies side is Jurnee Smollett-Bell’s character of singer Dinah Lance aka Black Canary. She is a singer For Ewan McGregor’s Roman Sionis, the villain of the story. In addition, she also serves as his driver, since Harley Quinn put his other driver out of commission by breaking his driver’s leg earlier in the story.
Also part of the ensemble is Rosie Perez’s tough-as-nails cop Renee Montoya. Also part of the troupe is Ella Jay Basco’s Cassandra Cain, a teen pickpocket keeping the girls on their toes.
“Birds of Prey” is just plain enjoyable. The women, for all intents and purposes are not the bad guys, rather just anti-heroes.

Directing chores for “Birds of Prey” were handled by Cathy Yan, who last directed the little seen “Dead Pigs” in 2018. It received recognition at the Dallas international Film Festival that year. It took home a trophy for Grand Jury prize in the Narrative Feature competition.

So readers know, the running time on this is 1 hr., 49 min.. It goes by really fast and quick, so there is not too many dry spells in the narrative.

They left the door open for further sequels, since the movie just ends with the characters all o their own adventures and such.