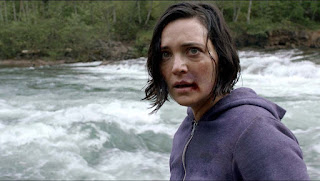 As a movie writer, my mind needs to be very picky when it all comes down to movies other critics and movie fans have watched and selected from the past. Alone is a cat-and-mouse chasing thriller that takes critics and audiences towards their edge of the seats on survival of the fittest on any human being or character. Alone is a strange, but peculiar concoction from Magnolia Pictures under their spin-off studio Magnet Releasing. It is a rarity these days, since it’s an original idea coming from the director. The film is directed by John Hyams and stars Jules Willcox in her main leading role.

In this thriller, Alone deals with a lonely woman named Jessica, now a widow after the death of her husband, is on the run from an unnamed man who is following her in pursuit in the wilderness. Her main goal is to desperately escape from that “man.”

Providing some remarkable performance is Jules Willcox who portrays Jessica, a traveling widower who is moving to another place. Actor Marc Menchaca (Law and Order), throughout the film, mainly appears as the unidentified man who follows Jessica all over the place and reveals to be a cold blooded killer. And lastly, actor Anthony Heald, who, after appearing in The Silence of the Lambs and Red Dragon (both of which are other films that involved serial killing), also appears as Robert the hunter who provides protection for her from that stalking man.

Though the film mainly consists of just three onscreen actors Jules Willcox, Marc Menchaca, and Anthony Heald, the story itself is, well, fairly simple as this film flows by as this is a cat-and-mouse thriller as mentioned before on my introduction. Director Hyams has put lots of freshness into how the main character behaves quite realistically within every situation. Hyams made Willcox to never fall for what's obviously a trap like many cinematic characters often do. There's a sense that she really knows what to do and would probably have done in the same situation rather than simply what the screenwriter thinks, which would be interesting in response for that matter. While such believability of any character is, unfortunately, rather rare in movies, there's also nothing very surprising and suspicious about it. From start to finish, everything is quite predictable.

This film borrows some elements from the 2020 film The Hunt, featuring Betty Gilpin as Crystal who is a prey and a victim in the hunting game set up by a rich woman named Athena Stone (portrayed by Hilary Swank). The film also contains some elements from The Hunger Games due to Jessica's character being a prey to the predator (the pursuer) and her battles for survival. Though, my main complaint is how weak the characterization of Jessica is throughout the film. It really brings up a lot of frustration to see how intense the director made Willcox’s role-playing game can be for this very-cliched serial killer plot, especially on the ending which left me confused that bit me completely in the dust. However, the focal point and realistic of their behaviors and the actors' performances really might be just a message about how their emotions, their survival, and their well-being got the better of them. In addition, the action sequences in the second half of the film are well put together. Over the top, the duo of Jules Willcox and Marc Menchaca knows what to do in working on a horror, thrilling movie as they enjoy filming from dawn till dusk.

Alone is an amazing little thriller. It clocks in around 98 minutes to that length of time. The director and the film deliver the goods on all sizes, angles, acting, and the writing which is very easy to follow. Even the cinematography looks darkenly beautiful in every scene being captured in the film. I realized that some greater films are hard to watch and are pretty easy to skip out on when you’re selecting a movie to see at home or theater. Please check out this film, you won't be disappointed.