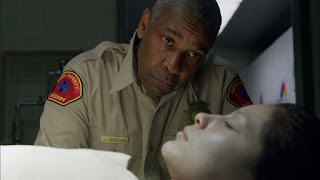 The Little Things is far as anyone can see!

As within the film’s release in theaters and on HBO Max at the same time, The Little Things is the first film to feature the new Warner Bros. Pictures logo byline for that release. If you love crime films so much, then you might want to take a gulp at this feature film. Director John Lee Hancock returns to the director’s chair to helm this action, crime feature film. The film stars Denzel Washington and Rami Malek in their leading roles, with Jared Leto in his supportive role.

The Little Things takes place in 1990 and follows two police officers who have been assigned by the police department in Los Angeles to capture the strange, serial killer on the loose as their top suspect of the city.

The acting performances and the duet coming from Washington and Malek together are nicely put as if they’re working on a Sherlock Holmes movie, giving the fact that this film is R-Rated, going overboard with the mystery, detective film for the course. They both knew how hard it is to act together onscreen and playing the roles of police officers can be a tricky task but in the end, they both know the tips and tricks on portraying their hardest key role as an ordinary police officer as well as a private detective.

Additionally, Jared Leto also does a great job of playing the serial killer Sparma in the film, having been portrayed as The Joker in DCEU’s Suiddie Squad, directed by David Ayer. He will be set to reprise his role in the upcoming Zack Synder’s Justice League cut, which will be released on HBO Max sometime in the future. Leto’s role as Sparma is what makes the film so unique to watch when it comes to bringing a sudden antagonist reveal in front of the audiences’ faces as part of the film’s climax. Surprisingly, if you heard the recent news, Leto has just received a nomination for Best Supportive Actor for his role in the upcoming 78th Golden Globes ceremony.

Under the direction from Hancock himself, the direction slowly adds a promising delight for that surprising thriller twist, utilizing the skills from several crime, noir movies involving catching thieves, killers, and murderers. Coincidentally, the film has borrowed some elements from David Fincher’s 1995 film Seven, featuring the stars Brad Pitt and Morgan Freeman. However, Hancock and his editing and writing team regardless of professionalism have really toned down the nature of how any action film can go. Admittedly, the movie looks good when it comes to visuals and special effects; the cinematography is appropriately moody, with tons of dim lighting being shown for the majority of the running time that casts a dark, hellish shadow over its characters. And because of that, tonally, the movie is completely inconsistent. The pace and the sequences felt all over the place, with the film only picking up when Jared Leto's character who comes in the second half of the film.

Overall, The Little Things is a two-hour film with great performances but with a really interesting premise that has brought my excitement down due to its editing, pacing, and tonal inconsistency of the film. It isn’t enjoyable to watch but with this cast, it should've been much better than it ends up being. Washington, Malek, and Leto are what makes this film simpler to see. Though, this is definitely not a crowd-pleaser, I recommend the different approach that the movie took. I was keen to try this film out and I am very sorry to say this, but you might want to find another film that captures your enthusiasm to make up for those two hours of your life.