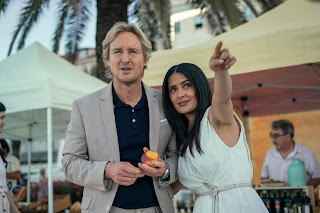 Ignorance is BLISS but misses the mark!

People often say fantasies are just a make-believe, but for this one, it's even weirder than it looks. Take Bender Rodriguez from Futurama for example, every time someone has a heart or soft nature, Bender would simply laugh at that and, also, people’s misfortunes without showing any signs of care or concern. Bliss is a drama film takes you to how reality can be in this modern vs the reality that provides a colorful paradise where people can dream all around and make wishes come true. The film is directed by Mike Cahill (Another Earth) and stars Owen Wilson and Salma Hayek in their main leading roles.

Bliss follows the story of a unfulfilled, broken man named Greg who meets a mysterious, homeless woman named Isabel who believes they are both living in a simulated reality, but when their newfound "Bliss" fantasy world begins to bleed into the "ugly" world, their ways of “bliss” living becomes remarkable and completely out of hand. As they enjoy their newfound freedom of living in the fantasy world, the main problem they face is that they must choose which world is real and where they truly belong, whether in a blissful way or the reality way.

Owen Wilson (Pixar’s Cars films) stars in the film as Greg, a broken man who was recently divorced and fired from his job, while Salma Hayek (2002’s Frida, Eternals) portrays as Isabel, a homeless woman who meets Greg out in the streets and convinces him that the world he’s living in is not real and filled with uncolorful fulfillments as the world is stimulated with technology.

As director, Cahill filmed some scenes in Los Angeles to portray the real world while filming Croatia to portray a colorful fantasy “bliss” world, which is very brightful and enjoyable to watch as the film progresses on the relationship chemistry between Wilson and Hayek. It really adds some decent textures on how dreams reflect and become a reality, taking mental advice from Willy Wonka (portrayed by the late Gene Wilder) from Willy and the Chocolate Factory. Cahill and the crew want to mainly focus on Wilson and Hayek altogether to give stronger character developments on the two and conveying messages to each other onscreen on how illusions can change from one’s disoriented mindfulness to one’s greatest perspectives in living the happier, lively worlds.

Throughout the film, Cahill utilized the many special and visual effects to give both worlds of the film a proper scenery on how one can compare the real world where it is ruled by technology vs. the happier colorful world where humans can roam around freely while technology did all the work for humans. Also, the weather patterns seem advisable and applicable as the real world contains cloudy and rainy with less sun, giving a feel of living in a depressed, boring world while the “bliss” world scene feels sunny and bright, changing the tone and perspective of happiness and livelihood.

Despite the colors being present, Bliss is ok, but not enjoyable. Ignorance is always bliss and it clocks around 103 minutes. Cahill, Wilson, and Hayek really fit the bill for Cahill’s own breakout drama movie. I heavily respect all the hardwork coming from the cast and crew. Wilson is one of my favorite actors who shine in the spotlight. Though, I really wish this film would add more color and texture to it as well as having to use less technological advancements to make it more appropriate.