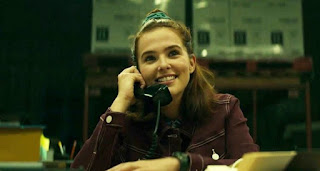 Debt is, and always will be, a very serious and depressing subject in America as money being the biggest issue in people's lives. If you've ever seen any crime drama films in your life, you find this movie very fascinating because of the main character's money-scheming persona being shown directly towards the audience. Director Tanya Wexler offers a whimsical, comedy-drama film that takes Zoey Deutch's fans to the promiseland of a woman’s dream for the price of admission. While Buffaloed is directed by Wexler herself, it is written by Brian Sacca and stars Zoey Deutch in her leading role along with Judy Greer, Jermaine Fowler, Noah Reid, and Jai Courtney who are given supportive roles in the film.

Buffaloed centers on a young, hustling girl named Peggy Dahl whose main goal is to escape the debt-collecting world in Buffalo, New York into paying much money to pay off her debts. After getting into much trouble for illegally making money that leads her to get arrested by the police, she decides to become a debt collector herself and wages war with the city's debt-collecting kingpin.

Zoey Deutch (2016’s Everybody Wants Some!!, Disney Channel’s The Suite Life on Deck) portrays Peggy Dahl, a early twenty-something year-old who looks like an ordinary teenager, finds work as a debt collector following her arrest and she is struggling to pay off her debts while Judy Greer (FXX’s Archer) plays as her dysfunctional mother. Actor Jermaine Fowler comes into the scene as Graham Ferry, a lawyer ailing with Deutch. And lastly, actors Noah Reid (Schitt’s Creek) and Jai Courtney (Suicide Sqaud) roll in as Peggy’s brother JJ and Wizz, a debt-collecting kingpin with a Italian-mafia persona who serves as the main antagionist to Peggy, respectively.

Under the direction from Wexler (2011’s Hysteria), the film has borrowed some elements from Mad Money (with Diane Keaton starring in it), Hustlers (featuring the stars of Constance Wu and Jennifer Lopez), The Wolf of Wall Street, and Catch Me If You Can (with, coincidentally, the latter two films featured Leonardo DiCaprio in his main roles). Wexler and her team, along with the actors, really nailed the story down as well as the studying the pros and the cons of the film’s character developments on each one onscreen. No CGI or special effects used in the film, which is a good thing in order not to have too many eggs in one small basket. The costume is really outstanding and colorful to add the richness and texture for Peggy’s persona throughout the film.

The actors did an amazing job as well despite the supportive characters being given smaller, speaking roles while trying to keep up the main character throughout the film. The entire cast of actors are doing their best to keep up with the pace and tone of the story for that crime-thrilling genre, especially in the second half, mainly Deutch and Courtney whom they look like they're having a blast while working with each other together in person. They knew what they’re doing in order to make the story appealing to the audiences. But whatever is happening between them, they both try their best to please the director when it all comes down on making an eponymous gangster film or mafia-esque B-movie.

While the film is fun and enjoyable to digest, there are some downfalls in this film. Screenwriting dialogue seems a bit messy as the crew only focused on Deutch’s character role, while the supportive “family” characters being shoved into the gangster’s hands, which left me questionable on why the director wanted the debt-collecting gang to seize her (Peggy’s) family. Also much of the strong language being used in the film, a feat being achievable to give this an old-school crime, gangster richness for that matter. And lastly, the ending where Deutch’s character breaks the fourth wall left me somewhat confused and easily unmotivated on what the ending scene is expected to look like. This is something that my mind is heavily not understood when it comes to female actresses shining the light for the audiences to listen. It’s a dream role that fits for a lot of actresses out there, but it is certainly not the easiest one to nail down the line.

Overall, Buffaloed is okay. It’s a fun movie to watch and it clocks in about 95 minutes. Deutch, Fowler, and Courtney fit the bill together. Plenty of laughs, fourth-wall breaks, and the story flows being perfectly paced if I do say so myself. However, in my honest opinion, this film isn’t too enjoyable as it looks and I’ll probably won't watch it again, but I can highly recommend it to those who are Zoey Deutch fans out there. So if you're a fan of Zoey Deutch, I say you can watch this, but for me, it’s going to be a hard pass for that offer.