The Map of Tiny Perfect Things 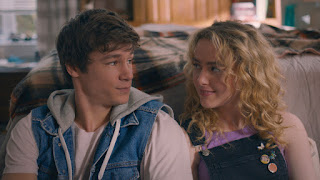 This film gives me the chills of being a science-fiction film or a romantic film or both at the same time like Back to the Future. Maybe to add comedy, this film can be a series of bloopers, which are hilarious to see on any film. The Map of Tiny Perfect Things is based on the short story written by Lev Grossman, who also serves as an associate producer and writer for this film. The film is directed by Ian Samuels and features the duo-leading cast of Kathryn Newton and Kyle Allen.

The Map of Tiny Perfect Things tells the story of quick-witted teen Mark, constantly living the same day in an endless loop whose world is turned upside-down when he meets mysterious Margaret also stuck in the time loop. Mark and Margaret form a magnetic partnership, setting out to find all the tiny things that make that one day perfect. What follows is a love story with a fantastical twist, as the two struggle to figure out how – and whether – to escape their never-ending day.

Actor Kyle Allen (American Horror Story, Steven Spielberg’s upcoming West Side Story) stars as Mark, a classy teenager living in a endless loop in normal, suburban life while actress Kathryn Newton (HBO’s Big Little Lies, CW’s Supernatural) appears on Allen’s side as Margaret as his girlfriend Mank has encountered. The chemistry between Kathryn Newton and Kyle Allen acting onscreen brings much more focal point of the view for any characters in any film, treating it like it is a serious romantic movie anybody has ever seen. They both knew that acting in romantic films can be a tough challenge for both of them, but on the inside, they simply enjoyed working together and they just simply rolled with it. The angels of the camera pointing directly towards Kathryn Newton and Kyle Allen produce more sophisticated tone with an increasable number of comedies being placed in some parts of the film.

Under Samuel’s direction, the film contains some elements from Groundhog Day and Back to the Future, the cinematography and the story seem to be in order for the viewers to follow as well as music coming from Tom Bromley, which puts the build-ups and the performances of Kathryn Newton and Kyle Allen being put together nicely in a well-organized state. Though the writing and the editing are very gritty and somewhat boggus to see despite seeing a movie’s title. Parts of the film kinda threw me up on the start as they are trying their best to work on the time-flying-backwards sequences. This film feels like it is heavily focused on relationships and time rather than fantasies taking place like this. The director and the team are trying their hardest to craft a nice, romantic movie with a side of comedy and science-fiction feel to it. Even the pop cultures being used which are hilarious and somewhat ludicrous to react.

Overall, The Map of Tiny Perfect Things is a great film, if not better. It clocks around 100 minutes. I honestly can’t tell whether this film can be a hit or a miss or both. Despite the ups and downs, Kathryn Newton and Kyle Allen are eager to please on what makes this romantic film very pleasant to see when it comes to selecting a movie at home. Speaking of romance, this would be good for Valentine’s Day for any who are fans of romantic films (and no, not counting some Disney animated films which are not widely considered romantic films at any case).