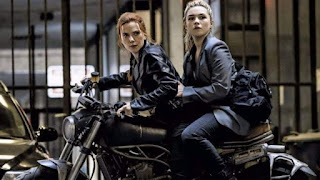 Marvel’s Black Widow is a theatrical survivor from COVID.

For nearly a decade of keeping the MCU running, fans have been long-waiting for this solo Black Widow movie, but not before COVID hits the world but after seeing The Avengers, which was released in 2012. The only solo films being released before that are Iron Man, The Incredible Hulk, Thor, and Captain America: The First Avenger. This year, Marvel Studios has officially granted the fans’ wish, but on a serious level. Directed by Cate Shortland, this film features the returning star Scarlett Johanssan along with a newer ensemble cast of Florence Pugh, David Harbour, and Rachel Weisz.

Black Widow follows where Natasha Romanoff (known as “Black Widow”), after her battle in Captain America: Civil War, goes on her run and is forced to go into hiding. While she does so, she has and develops a long conspiratory that ties directly to her, during which she forces herself to deal with her life-long history as a spy and fighter and her past, broken relationships with her friends and family she left behind on the time before she becomes an Avenger.

Scarlett Johanssan (The Avengers, Marriage Story) returns to the MCU onscreen, reprising her role as Natasha Romanoff/Black Widow, an Avenger who is also a fighting spy and formerly associated with S.H.I.E.L.D while actress Florence Pugh (Little Women) portrays her superhero role as Yelena Belova, a trainer and Romanoff’s friend who serves as a sister-figure to her. Actor David Harbour (Stranger Things) receives his out-fiting role as Alexei Shostakov / Red Guardian, a Russian soldier who is the counterpart to Captain America and serves as a father-figure to both Romanoff and Belova while actress Rachel Weisz (The Constant Gardener, The Bourne Legacy) has her supportive role as Melina Vostokoff / Black Widow, a training spy and a mother-figure to Romanoff and Belova.

After long periods of finding movie directors, director Cate Shortland took the stage as director for this film, becoming the first solo-female movie director for Marvel Studios. Her flawless films on her resume include Somersault, Lore, and Berlin Syndrome before getting promoted to Black Widow, which is her first action movie to helm. As director, Shortland drafts a fine, but arduous story on the ideas for the titular superhero after the character’s role-playing game from Captain America: Civil War. She also instructs Johanssan to keep in character like she did from the previous MCU films, but added some few character developmenting modifications to learn and understand better for the Black Widow character itself and the reality of it for the sake of the plot.

This film is more like a spy movie rather than a superhero movie itself, taking major influences from the eponymous James Bond films, but Shortland’s action sequences are flawless to say the least. She looks like she is going to do whatever it takes without failing at Marvel Studios. On the other hand, Johanssan, as an spy-fighting actress, really copies every move she does back in her MCU past as if she is fighting not only for herself, but also for her teams and friends to defend. Not only Johanssan’s acting and fighting skills are best bets, but Pugh, Harbour, and Weisz’s performances have done an amazing job in their superhero-fighting acting styles, supporting Romanoff's own Black Widow character.

The script-writing from writer Eric Pearson (Thor: Ragnarok) really adds some nice touches for the superheroes, the story, and the climaxes to build enduring relationships for the Black Widow team. Pearson knows that, based on his writing experience with Thor: Ragnarok, focusing on superheroes and fighters having a heartfelt connection with friends and family is just as more important than that dastardly CGI and the visuals displayed in the film and its backgrounds. Pearson’s screen-writing is just too emotionally wicked, even when he, along with Shortland, adds Lorne Balfe’s music composition that brings the all the flavors down, consisting with the matching textures of Hans Zimmer, John Powell, Henry Jackman, and Alan Sivestri.

Also appearing in the film are O-T Fagbenle (The Handmaid’s Tale), the returning William Hurt (Kiss of the Spider Woman, Captain America: Civil War), and Ray Winstone (Indiana Jones and the Kingdom of Crystal Skull). They are portrayed in the film as Rick Mason, United States Secretary of State Thaddeus Ross, and Dreykok respectively.

Overall, Black Widow is a wonderful movie, it clocks in at 134 minutes for the film’s entirety. Though, it may not top Avengers: Endgame as bestie for the Marvel Universe, but I’m sure this film is highly amazing and anticipating that manner. Shortland, Johanssan, and the cast really fit the bill together to make a movie a good one, if not better. That is all I’m going to say, I can’t give out any more details until you have watched this. This movie is worth the wait and is deeply a must if you’re planning on seeing this in theaters and/or Disney+. You should watch this whether or not you’re a Marvel fan.