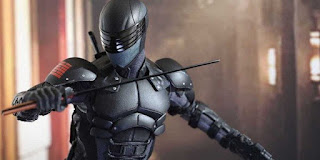 “Snake Eyes,” for all intents and purposes is just a fun flick. No earth shattering dynamics are involved here, rather just a fun time watching something one might of played with when they were younger. I too had some of the action figures when I was a wee lad.

So readers know, the full title of this yarn is “G.I. Joe Origns: Snake Eyes.”

I think that in the earlier adaptations, Ray Park was in both “G.I. Joe: the Rise of Cobra” and “G.I. Joe Retalliiation” a couple of years later.

Henry Golding is a tad taller with a 6’ 1” frame. Golding looks like he is having fun with the role, even wielding a couple of asction sequences involving swords and a major car chase on the Tokyo freeways.

The trouble is, however, the action scenes don’t really pull the viewer into the aforementioned events. Unlike what the Wachowski siblings did in the “The Matrix Reloaded” where a major fight occurred on the L.A. freeway, the fight in this movie, however never really warranted any due tension, rather a shrug of the shoulders and a so what reaction.

What was cool for me to see was actor James Hiroyuki Liao in an antagonist role. I know him best from re-runs of a great short-lived show “Umforgettable” at the start of the decade.

Directing chores for “G.I. Joe: Origins: “Snake Eyes” were handled by Robert Schwentke, best known for the Bruce Willis led ensemble that was “RED” in 2010 as well as the 2013 Jeff Bridges led sci-fi crossover that was “R.I.P.D.,” that also featured Ryan Reynolds and Kevin Bacon. Like the misplaced “X-Men Origins: Wolveerine” (2009) earlier in this decade, it does llittle to add but a backstory to the proceedoings. Honestly, it’s just a place filler for fans of the action genre who are fulfilling a chapter to satisfy their craving.

This one also sets up the “G.I. Joe universe” in that it introduces new characters for the stortyline, since that is what the audience members pay to see. It is kind of a nudge nudge wink to the audience since if all goes well, the follow up to this tale will get greenlit in a millisecond.

Like the earlier entries in the G.I. Joe universe, “G.I. Joe: the Rise of Cobra” and “G.I. Joe: Retaliattion,” “G.I. Joe: Origns: Snake Eyes,” does what it’s supposed to do and just work as sheer entertainment.