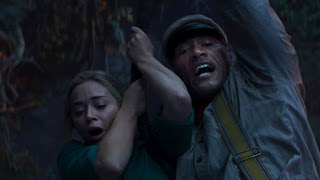 Jungle Cruise is the center of the universe!

Originally released in July 2020, this film widely deserves more attention than the Pirates of the Carribean franchise but there were some rumors about this film when they announced this on the news, with Toy Story actors Tom Hanks and Tim Allen starring in. The film is loosely inspired by the theme park attraction of the same name located at Disneyland and Walt Disney World over by the Magic Kingdom section. Having been directed by Jaume Collet-Serra, the film features the cast of Dwayne Johnson, Emily Blunt, Édgar Ramírez, Jack Whitehall, Jesse Plemons, and Paul Giamatti.

Jungle Cruise follows a riverboat captain named Frank Wolff who transports the British scientist Dr. Lily Houghton, and her brother MacGregor, on a mission into a jungle to find the Tree of Life, which is believed to possess healing powers that could produce and generate medicine. While set sailing, the trio must face perilous obstacles, such as fighting against dangerous wild animals, survive in a deadly, heated environment, and compete with the folks of the Imperial German expedition whom they are determined to find and claim the tree.

Jungle Cruise marks the fourth Disney film for Dwayne Johnson to star in. He appeared in The Game Plan, Race to Witch Mountain, and that animated film, Moana, for which he voiced Maui. As a lead actor for this film, Johnson has put aside his comedy-action acting skills to focus more on his meatier role as an actor in an adventure-survivor film. He really brings down a whole emotion of being an adventure towards Blunt and the cast as if he’s in another Jumanji movie. Based on his experiences with action-adventure films, he seems to be very good at what he does and needs to do under the director’s decisions whilst being a role-model towards his fellow co-stars onscreen as he always fulfills other people’s needs, including the director’s.

English actress Emily Blunt (The Devil Wears Prada, Mary Poppins Returns) portrays Dr. Lily Houghton, a British scientist who must embark on a mission to find the Tree of Life, supporting Johnson on his back, while Spanish actor Édgar Ramírez (Carlos, The Bourne Ultimatum) plays a mean, villany role as Agguire, a mercenary who is hired to assist the rivalry expedition to the Tree of Life.

The film is more like a survival film despite being advertised as a fantasy-adventure film and is directed by Jaume Collet-Serra. His films on his resume include Orphan, House of Wax, and some Liam Neeson-lead films: Unknown, Non-Stop, and The Commuter. He is set to direct his upcoming DC Comics superhero film, Black Adam (which will also star Dwayne Johnson in the film), as part of the DC Extended Universe. As director for Jungle Cruise, Collet-Serra seems to take heavy influences on the Disney Parks rides as well as inspecting the Pirates of the Carribean films in order to give the film and the cast proper storylines and settings. He also guides the actors on adventurous locations to shoot the boating scenes and the jungle scenes, even adding some nods of CGI and the visual effects correspondingly.

Though, there are some downsides to this film. First, some destructive usages of CGI and the visual effects on the scenes and animals, which are something that needs work on and take some of the worst parts away. Second, the director gave some weak villainy-character traits, which are really messy and gritty compared to the screenwriting from Michael Green, Glenn Ficcara, and John Requa. And lastly, since this film is based on a ride, the film didn’t put much fun-filled colors and fun tools for children.

Also appearing in the film are Jack Whitehall (Bad Education), Jesse Plemons (Breaking Bad, Frago), and Paul Giamatti (Saving Private Ryan). They both portrayed their roles as Lily’s brother MacGregor as part of Lily’s main mission, the German aristocrat Prince Joachim who leads a German expedition to find the tree, and the harbormaster Nilo Nemolato.

Overall, Jungle Cruise is ok, but better than the disappointing Pirates of the Carribean sequels if I do say so myself. Despite the massive usages of CGI and visual effects, the director, Dwayne Johnson, Emily Blunt, and the rest of the cast have done an amazing job of keeping this film as entertaining as possible. They are eager to please the fans and critics out there who waited this long to see this film since the pandemic has roared into place. I even mistake this for another Jumanji movie or another The Mummy movie, but this adventurous, survivor film is a moment to shine. Though, I wasn’t sure what to tell you with higher confidence but I think this overly-two-hour film is maybe a go-go but you might want to take some extreme proper precautions if you’re planning on selecting this film in theaters and on Disney+.