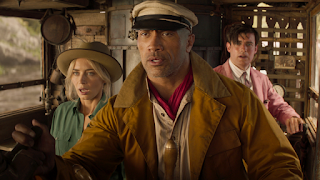 The Jungle Cruise ride at Disneyland opened in 1955 and became one of the most popular E-Ticket rides second to the Matterhorn at that time. For kids the hippos rising from the water next to the boat, the elephants on the shore, the crocodiles swimming towards you became an immersive adventure for young minds in the 1950's. For the parents, the skippers on each ride offered some cheesy dads jokes for their amusement. As one got older, kids began to notice the details and sometimes offensive depictions of the jungle natives which has only been recently corrected in anticipation of the opening of the movie. For today's media savvy youngsters, the ride didn't have any commercial tie-in's or references. It was old school, just becoming something you stood in a long line for your parents to enjoy a flash from the past. Disney now has revitalized the concept by adding some of the most popular actors to revitalize the franchise. The idea for a movie based on the ride started in 2004 going through several writers, directors and stars being attached. Eventually coming to life with Emily Blunt and Dwayne Johnson to headline the feature directed by Jaume Collet-Serra from a story by Glenn Ficarra and John Requa and a screenplay written by Michael Green, Ficarra, and Requa.

Set in the Amazon in 1916 before WW1, Johnson plays Frank Wolff, a skipper of a rickety but beloved boat that takes tourists on the river with a nod to the theme park ride complete with the dangerous animals and jungle natives who we find out later are of course paid by Frank to scare his passengers. Enter Dr. Lily Houghton and her fussy brother McGregor (Jack Whitehall) who are looking into their father's research of the legendary "Tears of the Moon" petals from the Tree of Life that is supposed to cure all ailments. Also hot on the trail of the petals is Prince Joachim, a deranged German aristocrat played by Jesse Plemons who basically steals the movie. He has a sub and crew who want the petals to help in the coming war. Paul Giamatti shows up briefly as Nilo Nemolato the harbormaster with whom Frank owes a lot of money. Édgar Ramírez is Aguirre, a deadly mercenary from the past, a cursed character that is brought back to life. There are so many previous adventure movie tropes carted out and woven together from African Queen, Raiders of the Lost Ark, Pirates of the Caribbean, and Romancing the Stone to name a few. The film relies heavily on the chemistry of it's lead performers which thankfully works better than one would expect.

Lily is a scientist and a modern fearless woman for the times. Frank who had never seen a woman wearing trousers nicknames her "Pants". He is reluctant to take her. Frank tries to discourage and subvert the trip at every opportunity as he seems to know more than he's willing to tell her. But Lily offers him a lot of money which he can't turn down as Nilo had taken his boat engine as collateral for the loan Frank owes to him. Dr. Lily and Frank's banter battles are fun and silly. You can tell they had a lot of fun making this movie. Frank throws most of McGregor's luggage off the boat because really who needs several changes of clothes and golf clubs for a trip on the river but keeps the booze. McGregor is another Disney LBGTQ character that they tried not to stereotype into the story by making him just the usual comic foil. Plus he actually says he's gay, which is a big step in Disney's attempt of inclusivity. He does haave some cute scenes with Frank's pet jaguar Proxima and getting drunk with the natives. It is Jesse Plemons who is just a kick as the villian. It's worth the watch just for him.

There are many CGI action sequences that are at times non-stop and forgettable. The quiet times when there is a bit of character development is a welcome respite. The Legend of the Tears of the Moon will not make sense to the little ones, but really who cares? It's just a construct to keep Lily and Frank moving to their goal while trying to create a chemsitry of the two that is more plantonic than romantic. Mexican actress Veronica Falcón plays Trader Sam who on the ride was selling shrunken heads. They tried to depict her and the tribe members in a little less racist manner, but they still come off as background and exotic. Disney has a long way to go on this point. Despite it's flaws, the movie is fun summer family movie that will play well in the theaters after a year and a half of staycation activities. It will also be available on Disney+ with Premier Access for US$30 for those still staying safe at home.