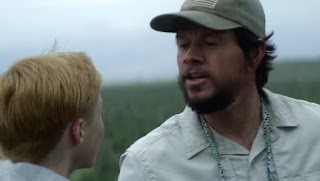 Bullying has seen a resurgence lately as seen in the media about airplane flights, anti-maskers/anti-vaxers, and the rise of Karen/Kevin incidences of folks offering their unwelcome opinions on everything. It's tragic especially when it happens to children by children who learn from their personal environment that it's OK to hate, insult, and physcially assault others. There has been numerous movies made about this issue, but are they really making a difference? Director Reinaldo Marcus Green, with a screenplay by Larry McMurtry and Diana Ossana brings a quiet and heartfelt true story based on a father's journey in the aftermath of his son's suicide.

In 2013, Joe Bell (Mark Wahlberg) is confronted by his 15 year old son Jaden (Reid Miller) comes out to his parents that he is gay and he's going to be a cheerleader. Joe tries to reassure his son that he's not affected by his revelation, that he loves him no matter what. But his wife Lola (Connie Britton) knows that he is probably not all that accepting. Jaden has been constantly bullied at school because he's so obviously different from the usual high school football culture in LeGrange, Oregon. When Jaden really needs someone to help and be there for him, his dad gives lip service to his blight, brushing it off as something to address at another time. So when Jaden loses all hope, the parental guilt of failing their child hits Joe like a ton of bricks. Lola has been drinking to deal with her sorrow. At one point Joe sits in his car with his gun before his son Joesph {Maxwell Jenkins) calls him out on it. He decides he needs to get out to clear his head, so he plans to walk to New York City, a place where Jaden dreamt of going, and talk to anyone who will listen.

Setting off with a cart to hold his stuff he begins his long walk sorting out his brain by imaging he's walking with Jaden having long meaningful conversations. Talking about the things he should have said to his son. He camps along the side of the road, occassionaly staying in motels. He speaks at resturants, highschools, local halls, anywhere he can speak to the community about bullying. Whether anyone is listening, Joe plugs along, town after town, mile after mile. Some people give him postive feedback to his mission. Faith in humanity falthers when someone steals his cart and he's forced to carry his belongings on his back. After six months and he's in eastern Colorado. He begins to question his purpose until a local cop stops him and brings him to the staion for a hot meal. They bond with the similar stories and a renewed sense of what he is doing will be heard.

Wahlberg who usually plays tough working guys, dials it back a notch with a man broken by grief and guilt. The internalized stuggles of the would-of/could-of's are nicely portrayed in his performance. Wahlberg has had charges of violence and racism as a teenager (for which he served some time) and in 2001 he founded the Mark Wahlberg Youth Foundation, which raises money for services and programs for young people. The film itself would work nicely on cable or required viewing for teens as a great starter conversation addressing the reality and costs of bullying.
(Review by reesa)


If you or someone you know may be struggling with suicidal thoughts, you can call the U.S. National Suicide Prevention Lifeline at 800-273-TALK (8255) any time day or night, or chat online. Crisis Text Line provides free, 24/7, confidential support via text message to people in crisis when they dial 741741.