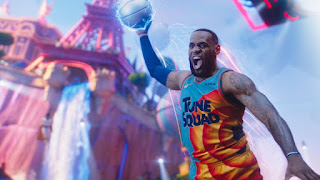 Ain’t I a stinker? Space Jam: A New Legacy is a long-awaited sequel in over two decades.

After the box-office success of the original film, the sequel has been in development for over twenty years with several ideas, story-telling creations, and projects of using athletics in future Looney Tunes films have been officially canceled due to the critical and box-office failure of Looney Tunes: Back in Action. The question is will this sequel ever get possibly made, the answer for both fans and filmmakers believe that there’s still a chance of making this sequel possible. So, in the end, the answer is yes, the sequel is worth making this possible. Having been directed by Malcolm D. Lee, Space Jam: A New Legacy features the basketball-playing star LeBron James in his main role, alongside with the Looney Tunes cartoon characters who are appearing as supportive characters.

Space Jam: A New Legacy follows the story of basketball champion LeBron James who is trapped in a virtual reality while rescuing his son, ruled by a powerful artificial intelligence named Al-G Rhythm. With that, James is forced to team up with Bugs Bunny, along with the other Looney Tunes cartoon characters, to win the basketball tournament against Al-G Rhythm’s digitized basketball champions called the Goon Squad in order to save his son and get back home.

LeBron James portrays himself throughout the film as well as voicing his animated counterpart in the film’s animation sequence while Don Cheadle (Hotel Rwanda, Avengers: Endgame) appears as Al-G Rhythm, an artificial intelligence who rules and kidnaps James’ son Dom in the virtual reality, prompting LeBron to rescue him. The chemistry between James and Cheadle really gives the nostalgic twists compared to the original Space Jam film where Michael Jordan encounters the animated antagonist Swackhammer (voiced by Danny DeVito). As a basketball player and actor altogether, James has a good rule of thumb on keeping his character like Jordan’s, but adding a few comedic nobs and some refreshing intakes on restructuring the Looney Tunes movie just to make this film extremely anticipated in so many levels, like the powerful fan-fave likes of Finding Dory, Incredibles 2 or maybe Chicken Run 2, which comes out in the near future. All that can be known is that James is trying his best to make this film a fun-filled outing for both Space Jam fans and the people who grew up in the 90s.

The film is directed by Malcolm D. Lee, known for his works like Scary Movie 5, Girls Trip, and Night School. As director, Lee studies and takes heavy influences from the original film by crafting similar scenarios and basketball routes in the film’s plot, the climaxes, and for the live-action and animation characters entirely. Lee, the crew, and the animators have themselves stripped up with lots of commitment of putting this wacky, but fun-filled tale into a big, ginormous cartoon with live action actors and scenes being included. Though, parts of the story got really lost, especially on the climaxes, as James enlists the help and teams up with the Looney Tunes characters. This whole sh-bang just another Michael Jordan adventure, even though that basketball player from the first film did not show up in a sequel.

The animation is very stunning with brighter, beautiful colors thanks to the usages of CGI and hand-drawn animation, with the latter being used in the recent show on HBO Max (and the rebooted Animaniacs show). Even the crossovers with other animation characters Warner Bros. have owned (such as Scooby Doo, The Flintstones, Yogi Bear, etc.) are trying to build a thirsty, eponymous match from the first film. The voice cast and veteran voice actors of the Looney Tunes also return for the sequel, consisting of Jeff Bergman (as Bugs Bunny, Sylvester, and Yosemite Sam), Eric Bauza (as Daffy Duck, Porky Pig, Elmer Fudd, Foghorn Leghorn, and Marvin the Martian), Bob Bergen (as Tweedy), Jim Cummings (as Tasmanian Devil), and the archive recordings of Paul Julian (as the Road Runner). New voice actors are introduced in the film: Candi Milo (as Granny), Gabriel Iglesias (as Speedy Gonzales), and Zendaya (as Lola Bunny).

The voice cast did an amazing job, providing the voices of those characters like they did in the previous Looney Tunes media, though the recasting for Lola Bunny and Speedy is worth not enjoyable and disappointing as Warner Bros. did not approach long-time voice actress Kath Soucie and the still-returning Eric Bauza to reprise their roles as Lola Bunny and Speedy. Instead, giving the role to Zendaya and Gabriel Iglesias. The same stunt happened to voice actors Matthew Lillard and Grey DeLisle for that new Scoob! movie, which was released last year, when they’re replaced by live action actors to voice their characters without being contacted from the studio. Going through the aesthetics, my main reasons for this (and that dastardly Scoob! movie) are that Warner Bros. believed recasting may be the zaniest action just to give any A-list live-action actors an opportunity to voice a character with or without the original voice actors’ approval regardless, giving the characters different persona intakes, and securing the film’s marketing anticipation.

Despite some laugh-out-loud slapticks and cooler-realistic animation displayed in the film, Space Jam: A New Legacy is just a two-hour soulless, average movie, maybe a bit better than the original film. Sadly, it did not land on the sheer brilliance and mind-blowing techniques of Robert Zemeckis’ Who Framed Roger Rabbit? film, though, Lebron James, the animators, and the voice cast did an amazing job, trying to entertain the fans and Looney Tunes lovers out there as hard work takes twice as much work as perseverance. I wasn’t sure if this sequel was worth the wait, but maybe in your thoughts, it might. I hate to crush your dreams and waste your time, but if you want to see this, you can, but I’m sticking my neck out for Who Framed Roger Rabbit? film and maybe that dreadful Looney Tunes: Back in Action, with the latter outperforming better than Space Jam based on the critics’ reviews. This film would be a stinker and a hard pass to live up to its name. The film is up in theaters and on HBO Max.