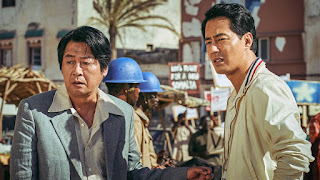 In the late 80's and early 1990's, South Korea and North Korea sent diplomats to Africa to woo the countries that will vote on their admission to the United Nations. Counselor Kang Dae-jin (Jo In-sung) and Ambassador Han Sin-seong (Kim Yoon-seok) try to meet with Somalian dictator Mohamed Siad Barre. Meanwhile the North Koreans, Ambassador Rim Yong-su (Huh Joon-ho) and Tae Joon-ki (Koo Kyo-hwan) who the South Koreans suspect of selling arms to the local rebels, suddenly find themselves at the beginning of a civil war to oust President Barre.

Directed by Ryoo Seung-wan, Escape from Mogadishu was based on the true events of the evacuation of both the North and South Koreans that had to work together to find a way out of the country. There's a bit of Argo and Black Hawk Down with tense and horrific violence as the diplomats and their families try to endure as angry rebels clash with Somolian forces who are just as cruel and corrupt. Not even their diplomatic status can help them.

This film is not your usual shoot'em up adventure. There is a more personal perspective of the characters in play. The career diplomats who serve in often hostile countries with their families. The spycraft, the bribes, the sensitive dance that one has to engage in to bring a favor to their mission. Counselor Kang is more hot headed and uses his press sources for intel. Ambassador Han is more measured and world weary having devoted most of his service with little resources. Their distrust of their Northern countrymen makes it a difficult choice to rescue Ambassador Rim, staff and their families when they run from their embassy after the rebels vandalize the building and steal all their belonings and money. Despite their political differences and rumor based fears, they let them in and feed them what little they had left. There is no power, food or water. The Somolian guards hired to protect them have suddenly left. They plan for the two groups to escape to other embassies. South Korea will go to the Italian Embassy as they have a relationship with them. The North Koreans are not welcome there, so they will go to the Egyptian Embassy. Unfortunately, Egypt can't help. Ambassador Han tells the Italians that the North Koreans are converting to the South, so they would be eligible to escape with them.

Despite the geo-political background of the times, it really comes down to the relationship of the two Koreas that have to put aside their anomosity and find a way out. Kang at one point realizes that the North Koreans can not go with them to the South or the children that they had to leave behind would become orphans. It's a harsh reminder of how different their societies have become.

Filmed in Morocco in 2019, the opening of this film was delayed by 2020. It opened in South Korea becoming the biggest opening of the year beating out Jungle Cruise. It's a fast paced, well acted actioner, with at the edge of your seat final act of the escape through the streets of the war torn city with both rebels and Somolian armies hot on their heels. At one point you can imagine the warring factions as mindless zombies chasing them as the pursuers have the same single minded purpose of death to all. It's one of those stories that no one would know about but should.
(Review by reesa)

Email ThisBlogThis!Share to TwitterShare to FacebookShare to Pinterest
Labels: Escape from Mogadishu review