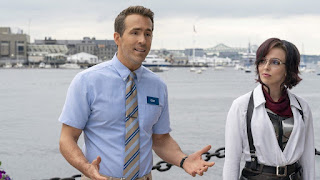 Free Guy is the funniest Ryan Reynolds movie ever!

So basically, actor Ryan Reynolds is just Ryan Reynolds playing as Ryan Reynolds in every Ryan Reynolds movie. And that’s the ticket to your comical needs of your desperation. Director Shawn Levy is turning up the heat for Reynolds right there to direct Free Guy. Having been written by Matt Lieberman and Zak Penn, the film features the stars Ryan Reynolds, Jodie Comer, Lil Rel Howery, Utkarsh Ambudkar, Joe Keery, and Taika Waititi.

Free Guy takes place in the open-wide video game world called Free City, where the game setting focuses on an average man named Guy who is a non-player character (NPC) working as a bank teller. With the Free City game being developed and programmed by founders Millie and Keys and published by Antoine, Guy soon becomes self-aware of his world being a video game when he falls in love with video game character Motolov Girl operated by Millie herself, and takes steps to make himself the hero, creating a race against time to save the game before the developers can shut it down.

Ryan Reynolds (Deadpool) stands in as Free City’s non-player character named Guy who works as a bank teller until, upon meeting that female videogame character Motolov Girl, he realizes he’s living in a video game world instead of a real world while performing the same routine again day after day. Reynolds is basically having fun playing himself in a different character name, he certainly looks like he really enjoys his job as an entertainment actor and (possibly) the funniest actor alive. Whenever any director, such as Levy himself, needs him to bring the comedy down the house, Reynolds is there to save or satisfy their directorial needs.

English actress Jodie Comer (Killing Eve) plays her game role as Millie as well as her video game avatar Motolov Girl who Guy falls in love with. Comer nails down every inch of role she has ever given for the sake of the film, the story, her own character development, and the director’s wishes as well. She even helps Reynolds in the film by offering some advice about life and purpose. Thus, alternating Reynolds’ Guy character development and timeline.

Actor Taika Waititi (Jojo Rabbit, Thor: Ragnarok) walks into the house as Free City publisher and the main antagonist Antoine. Judging by the casting, seeing Reynolds and Waititi seems like an atypical, peculiar combination, given the fact they worked together on a promotional short film of this as Deadpool and Korg in the Marvel Cinematic Universe. In the film, Waititi just keeps doing what like to do to bring out the drama and comedy towards his fellow acting co-workers on the set. His wildy “gangster” appearance is heavily based on how his game-playing persona really triggers his role as a game publisher and a game credit hog. Even though acting in a video game movie can be difficult, Waititi knows his skills, his steps, and his direction in every CGI/visuals-effect additions affecting his moments in various scenes of the film.

21 Laps Entertainment founder Shawn Levy is the director of the film. You may not know him but his film credits include the kids’ comedy flick Big Fat Liar, Cheaper by the Dozen (with Steve Martin), and the Night at the Museum trilogy (featuring Ben Stiller). He also produced Stranger Things and the 2016 film Arrival (with Amy Adams and Jeremy Renner starring in), for which he was nominated for the annual Best Picture Oscar. Since this is a video game movie rather than a science-fiction movie, director Levy has the actors study video games and the designs to portray what lies between the video game world and the real world. Levy also has the CGI and visual effects crew to work on the video game worlds and the pieces of Ryan Reynolds’ exploration in the world while the actors playing as gamers do what other video gamers do in the film. Levy even went further to provide pop culture references and cameo appearances, taking many influences and hardball cases from various video games and video game films (like Disney, Marvel, Minecraft, Grand Theft Auto, Anime, etc.).

While the film is funnier to watch, the somewhat-distractive CGI, and little-too-much visual effects have really thrown off the edge from being a great sci-fi flick as the director took advantage of this video game atmosphere to create more depth to bring the cultural themes of video games. The story and its writing from Matt Lieberman and Zak Penn are a bit woolly while some character developments ended up being dry for its measurements. No matter, the comedy and the music from composer Christopher Beck really redeemed this film from being a commercial and critical flop and intentionally saved the light on both the game world and the real world. Levy and the crew both know that the temptation is irresistible.

The rest of the cast featured in the film are Lil Rel Howery (The Carmichael Show, Get Out), Utkarsh Ambudkar, and Joe Keery (Stranger Things). Howery portrays Guy's best friend Buddy, a bank’s security guard who always enjoys the same routine without a fuss until Guy inspires him to do what he really wanted to do in his life. Joe Keery receives his supportive, but superior role as Keys, co-founder of Free City, who helps Millie crack the codes for their game and the Guy character while Utkarsh Ambudkar receives his role as Mouser who assists Keys.

Aside from pop culture references shown in the film, the film also includes several, yet surprising cameo appearances that are really enjoyable and highly hilarious to see. They include Youtube streamers and professional gamers like Jacksepticeye, Ninja, Pokimane, DanTDM, and LazarBeam as well as celebrity actors Hugh Jackman, Dwayne Johnson, Tina Fey, John Krasinski, and the MCU regular Chris Evans. Speaking of cameos, this film is dedicated to Jeopardy host Alex Trebek who posthumously cameos in the film.

As aforementioned, Free Guy is the funniest Ryan Reynolds two-hour movie, but maybe the most surprising hit of all, lying between the OKs and the “very good” section. I felt like I’m seeing a modern, present-day Zelda game or watching any video game being played by someone else, but I mostly enjoyed Reynolds’ performance, numerous comedic laughs, and the cameo appearances from celebrities and gamers. Reynolds really killed it on his part and so does Comer under the blessing from the director. I mean, who knows, this is a smorgasbord of fun and lasagna-filled laughs for Ryan Reynolds’ fans out there. This film is definitely worth the wait and is hilariously a “must.”