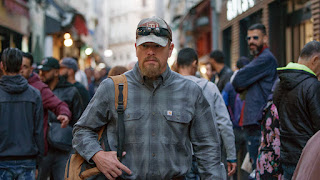 Tom McCarthy has not made a bad movie yet.

He won an Oscar a couple of years back for directing he Oscar-winning "Spotlight" in 2015.

He always tells compelling and intriguing stories about the human condition. Even his so-so movies are notewoprthy. Namely the Adam Sander-led "The Cobbler," (2014) in which a person gains a new identity by slipping into someone else's shoes.

"Stillwater" is a Matt Damon-led movie, however. It follows his stint visiting his daughter (Abigail Breslon) oversseas, where she is accused of killing her former Arabic girlfriend.

While overseas, he befriends a mother (Camille Cottinoleen) and a daughter, Maya (Lilou Siauvaud). He strikes a friendship and relationship with the pair. The duo are essentially a lifeline for him as he deals with agovernment in a foreign land that cares little for human life and the right side of justice.

The pacing on this film is not altogether quick, but is more of a sllow burn tale.

Damon is solid as usual as well as Breslin, who always knows what she is doing.

On a side note, I interviewed McCarthy for "Win Win" back in 2011. I brought my copy of his directorial debut "The Station Agent." He signed it for me as well as his other effort at the time, "The Visitor" (2007) with Richard Jenkins.

So, "Stillwater" is a movie worth seeking out, but as aforementiomned their are not a lot of bright or dazzling fireworks rather just a satisfying means to an end with this entralling drama.