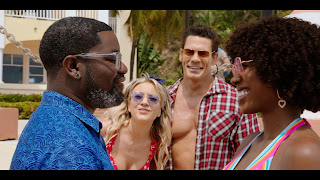 
We’re not really sure what to make of the second couple of protagonists in co-writer/director Clay Tarver’s Vacation Friends. They’re diametric opposites of the main couple that leads the story, so in comedic terms, they are perfect foils. In broader terms, though, this very raunchy, occasionally clever comedy doesn’t quite understand how to ingratiate us to them. It does help that Ron and Kyla, the carefree couple in question, are played by John Cena and Meredith Hagner, actors who are often very funny when given the right material. As for that material, again, there is a sense of warring attitudes here: Are we supposed to laugh at their weirdness or simply be uncomfortable about it?

If the approach taken by Tarver and his co-screenwriters (siblings Tim and Tom Mullen and Jonathan Goldstein and John Francis Daley) wasn’t clearly meant to be a big, raunchy comedy, then one could see the movie working on the ruthless level of a Neil LaBute screenplay. Ron and Kyla would be unapologetic in a way that matched the surrounding attitude toward their behavior. As it is, the film is more simply going for the comic payoff to the bizarre friendship that develops. Ron and Kyla merely do weird things, both on the trip to Mexico where they meet the protagonists and during the wedding weekend that ensues after a jump forward in time.

We like Marcus and Emily, the main couple, a lot more immediately, not least because they are played with no shortage of charisma and chemistry by Lil Rel Howery and Yvonne Orji. He’s the owner of a construction company who has become far too dependent and focused upon his work recently, and the pair, who begin the story as an engaged one, have decided to head to Mexico for vacation. Their troubles start immediately, with their room flooded by the Jacuzzi in the one above and the only other room in town belonging to a one-star hotel. They have, of course, arrived with the expectation of five-star treatment. That’s when they meet Ron and Kyla, whose devotion to a problem-free philosophy borders on recklessness.

That’s another way of saying that, yes, theirs is the room above (and the Jacuzzi within it), which is not surprising whatsoever. They serve Marcus and Emily margaritas with a more intense substitute for the salt around the rim. They make up wild and distressing stories about themselves to make their lives seem even more interesting than they are. When saying goodbye at the airport, they loudly embellish bomb threats and human trafficking and drug-smuggling suspicions for the laughs. Meanwhile, Marcus and Emily are more cautious, considerate, and stable.

It comes as no surprise, though, when the narrative jumps forward by seven months to the main couple’s wedding ceremony, where Emily’s father (Robert Wisdom) is dismissive of Marcus’ occupation (he’s a “construction worker,” despite numerous protests to clarify that label). Ron and Kyla crash the wedding, cause a major misunderstanding involving a pregnancy and one aspect of a wild night of drugs and booze, and somehow work everything out with Marcus and Emily by the end. This feels like the film’s final word on whether we’re meant to like or to gawk at this crazy couple. Vacation Friends is still an uneasy mixture of raunch and discomfort, though, with good actors who deserved more refined material.
Review by Joel Copling