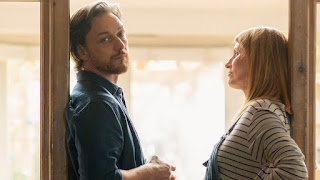 Together is always a message for people at home during the COVID-19 pandemic!

Being together is the positive message and vibe to those who missed seeing each other during this difficult, frightening time due to COVID and the uncertainty of their future lives. This film feels like an English-British version of Ed Helms’ Together Together film released in the same year, but this is all very different. Together is a dark comedy-drama film that deals with the heavy concerns of the COVID-19 that causes the entire world to go into quarantine until the world gets better and brighter. The film is directed by Stephen Daldry and features the duo of James McAvoy and Sharon Horgan.

Together follows the story from the very first days of the COVID-19 lockdown in March 2020 until the present day. It focuses on a married, but dysfunctional couple who are re-evaluating their relationship and learn how to deal with the uncertainty of their future throughout this COVID-19 pandemic while caring for their 10-year-old son, Artie.

Stephen Daldry steps in as director to take on the challenge of crafting a film that takes place in the center of COVID-19 pandemic. Daldry’s films on his profile include Billy Elliot, Extremely Loud & Incredibly Close, The Reader and The Hours. For his work on Billy Elliot, The Reader, and The Hours, he received his nomination for Best Director Oscar for both films. All of his films, except Billy Elliot, have received an Oscar nomination for Best Picture, so Daldry is highly an Oscar-trending talent when it comes to movies and onstage productions with unique storytelling.

This film only contains a very short cast of actors in the film. They are James McAvoy (The Chronicles of Narnia: The Lion, the Witch and the Wardrobe) and Sharon Horgan (Pulling, HBO’s Divorce) as well as child actor Samuel Logan. McAvoy and Horgan portrayed their role as a married couple who expressed concern about the COVID situations affecting their lives, their relationship, and their son when they heard the news in the UK while Logan appeared as Artie, the couple’s son. The chemistry between McAvoy and Horgan is brilliant and so is the screenwriting coming from writer Dennis Kelly. Of course, COVID is a very scary thing, but the actors reassured us that we can get through this, they just keep lecturing and guiding the viewers to bring the positivity towards the audience and critics.

Although not all fourth-wall breaks and the monologues are not as funny and enjoyable compared to fourth-wall breaking fictional-characters like Deadpool or Ferris Bueller, some are very confusing as the director wants the audience to engage on opening a conservations about the certainty and the uncertainty on their well-being, their health, and their vibes at home. This movie and its story do feel like a stage play, since they mostly involve us in their conversations, they look straight to the camera and give us lectures on how to stay productive and active during this ongoing pandemic. It's kind of oddly-strange for a second, but it doesn't last long for me to be hooked on that story and the aromatics of this COVID situation on what needs to be done and well-handled.

Together is okay. It clocks in around 90 minutes, but it doesn't feel long for its time length. This movie is just on in the background, but then I just get caught by it. The acting is superb, and the script is funny, sad, and poignant. This movie is tough to watch, but rest assured, it is an insight into many relationships and the ups-and-downs they are willing to face during lockdown, like all of us. It is a compelling viewing pleasure. I wish lots of people, who spent the time doing new things or something to pass the time, would watch this.

Email ThisBlogThis!Share to TwitterShare to FacebookShare to Pinterest
Labels: Henry Pham, Together review