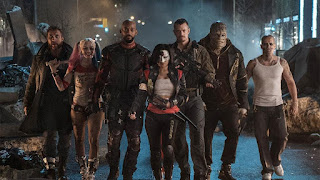 The Suicide Squad is better than the original!

Just letting the fans know that The Suicide Squad is not a direct sequel to that disgusted original film, but is rather a standalone sequel. For some odd reason, lots of people didn’t like the original film due to the finishing touches of it with some fans and studio executives believing that the future of DC Extended Universe is in jeopardy. After James Gunn was [temporarily] fired from Disney and Marvel Studios, Warner Bros. and DC Comics seized the opportunity to hire him as director and writer of this sequel after looking for several replacement directors since David Ayer, the original director of Suicide Squad, has stepped out. The film features the returning star Margot Robbie, alongside Idris Elba, John Cena, Joel Kinnaman, Sylvester Stallone, David Dastmalchian, and Viola Davis.

The Suicide Squad focuses on the task group of convicting prisoners, consisting of Bloodsport, Nanaue, Ratcatcher 2, Polka-Dot Man, and Peacemaker, who are sent by Amanda Waller to destroy Jotunheim, a Nazi-era prison and laboratory that holds prisoners and conducted experiments, as well as battle against the gigantic alien, sea-creature look-alike called Starro. Along the way, the team is also tasked to rescue Rick Flag and Harley Quinn, with the latter being held captive by the Corto Maltese President and his military comrades.

James Gunn (Marvel’s Guardians of the Galaxy) is the director of this film after being ousted from Marvel for a short time. As director, Gunn has to fill David Ayer’s shoes as he cleans up Ayer’s mess from the original film as well as adding some new story twists on the settings, the characters, and the script-writing with the side of humorous comedy in the background. Gunn looks back at the original film as well as several war films and superheros to capture the tone and quality for the film’s storyline and unique, ballsy setting for the characters, and the creative CGI-bloody, violent action sequences splattering around the bushes. If one takes my advice, some examples for everything aforementioned include Platoon, Forrest Gump, Full Metal Jacket, and some MCU films.

Actor Idris Elba is a newcomer to this sequel, portraying his meatier, superhero role as Robert DeBois/Bloodsport, a criminal and mercenary with a technologically-advanced suit and weapons, while actress Margot Robbie reprises her role as Dr. Harleen Quinzel/Harley Quinn, a crazed criminal and former psychiatrist. Elba is originally going to be Will Smith’s replacement, but director Gunn gave him a new role to allow Smith to return in the future.

The other members of the Suicide Sqaud include John Cena (Ferdinand, F9) as Peacemaker, Sylvester Stallone (Rocky films) as the voice of King Shark, David Dastmalchian (Ant-Man) as Abner Krill/Polka-Dot Man, and Daniela Melchior as Cleo Cazo/Ratcatcher 2, a young girl who can control rats and community with them.

This sequel is a unique combination between war films and superhero films, it blends humour and seriousness perfectly. Some of the scenes between John Cena and Idris Elba are hilarious, as well as the lines from King Shark. Even David Dastmalchian and Margot Robbie are such good helpers to trigger tons of die-hard laughs and colorful dynamics onscreen. The action sequences are highly stunning and bloody violent for that R-Rated advantage. My main guess is that the studio is very tired of giving the superhero films a PG-13 rating in order to get more views and audiences. But the main enjoyable parts are the funny chemistry of Bloodsport and Harley Quinn, the visuals, the humor coming from all characters and superheroes, and emotional moments from the main Suicide Sqaud team. The film felt like Gunn really takes his Guardians of the Galaxy directorial steps too well without any hassle. With good direction and great dialogue coming from writer Gunn himself, this sequel is filled with enduring, funny one liners and never takes itself too seriously, going straight out of boredom and confusion.

The returning actors from the original film are also present in this sequel. Viola Davis (Fences) returns to the sequel as Amanda Waller. Davis provided some background, hidden-antagonist feel right there while giving orders to the task force team whilst Joel Kinnaman returns to his role as Rick Flag, the leader of the Suicide Squad ordering the task force members on what to do, with Jai Courtney returning as Captain Boomerang. On the other side, the film also includes some small screen times of Michael Rooker as Savant, Taika Waititi as the first Ratcatcher and Cazo's father, Pete Davidson as Blackguard, Nathan Fillion as Cory Pitzner/T.D.K., formerly known as The Detachable Kid, and Sean Gunn as The Weasel. This Weasel character adds more die-laughing humor to it.

In conclusion, The Suicide Squad is an incredible sequel, maybe reaching greater, ballistic heights of an average DC Comics film that will jump out of your seat with glee and excitement. It clocks in at least 132 minutes. I will say this, this sequel is better than the original film and is basically like an Avengers movie targeting adults with violence, gore, irreverent comedy, and much, much swearing being placed all over. And yes, you will figure I said those words. Gunn really nailed his role as director and the cast all did a terrific job as well, especially Idris Elba and Margot Robbie. These two both killed it victoriously. The Suicide Squad is definitely a must, no joke, and this is a kind of DC film that will make Marvel look bad. So, I’m sending my compliments to Mr. James Gunn himself. This is the kind of Suicide Squad film lots of people have been waiting for at this very moment.