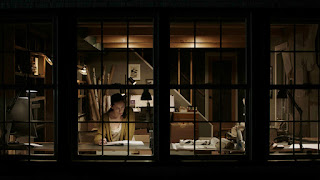 Director David Bruckner’s “The Night House” can’t decide what type of horror movie it wants to be. On one hand, it explores its main character’s grief over her husband’s recent suicide, using the ghost angle to reflect on how his actions have affected her. On the other, it falls into the typical traps of modern horror movies, relying on cheap thrills and loud noises to jar the audience as Beth’s psyche weakens. It’s as if Bruckner is trying to straddle the line between art-house and mainstream. He fails at both.

Bruckner opens the movie with Beth’s (Rebecca Hall) return from Owen’s (Evan Jonigkeit) funeral. Hall portrays the character with precision, painting the portrait of a woman who’s haunted by her husband’s actions. She’s teetering on the edge and ready to fall off (easily the best element of this film). When the hauntings begin, the audience is left to wonder how much of what Beth is experiencing is within her own head.

As she starts to purge Owen’s possessions from the house, Beth begins to uncover secrets that make her question what she knew about him and their relationship. Her friend Claire (Sarah Goldberg) warns her to stop digging for answers but, of course, Beth doesn’t listen. This leads to some disturbing revelations.

Writers Ben Collins and Luke Piotrowski introduce ideas then drop them just as quickly. The story seems like it will go in one direction then willy-nilly goes in another. Even the hauntings are inconsistent. They start with the typical loud noises, electronics turning themselves on, and shadowy figures you can’t quite make out before evolving into other terrains. Collins and Piotrowski include elements that ultimately don’t go anywhere, frustrating the viewer.

At its core, “The Night House” is a slow-paced haunted house movie. Although cheap thrills are inserted early on to try to liven up the proceedings, this will probably be a hard sell for most audiences looking for a thrill. To put it bluntly, I frequently wished this one would hurry up and end while watching it. The most frightening part of my film experience was the odd noises coming from the back of the empty theater (I was the only one in attendance at the showing I went to).

There are some interesting concepts and visuals scattered throughout the film so it’s not a total waste of time. Still, this is one that I think could have been handled much better.
(Review by Bret Oswald)