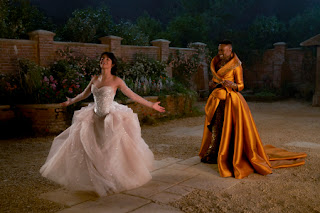 Cinderella is a colorful-faithful musical event for children and adults of all ages.

Just letting the audiences know that it is not a Disney film. In fact, this film serves as the first live-action adaptation from the story written by Charles Perrault since the release of the 2015 remake of Cinderella, released by Disney. This remake, however, takes a refreshing, modern take on the story when Sony Pictures decided to do a musical of this piece. With producer Kay Cannon taking her directing chair to helm this new live-action adaptation, this film introduces singer Camila Cabello in her acting debut, alongside Idina Menzel, Minnie Driver, Nicholas Galitzine, Billy Porter, and Pierce Brosnan in their supporting roles.

Cinderella focuses on a young girl and dress designer named Ella who’s been living an abusive life with her cruel stepmother and her stepsisters after the death of her father. She dreams that one day she wants to be a well-known fashion designer while encountering Prince Robert, the son of King Rowan, who falls in love with her. Pitch Perfect writer and producer Kay Cannon is the director of the film, marking this her second directorial effort after Blockers, featuring the stars of Leslie Mann, Ike Barinholtz, and John Cena who both played as the trio of parents to their respective daughters, portrayed by Kathryn Newton, Gideon Adlon, and Geraldine Viswanathan. She also wrote and produced some episodes from two television sitcoms, 30 Rock (featuring Tina Fey and Alec Baldwin) and New Girl (starring Zooey Deschanel).

Singer Camila Cabello makes her acting debut in the film, portraying her main role as Ella (also known as Cinderella), a young girl who dreams of becoming a fashion designer, while Nicholas Galitzine (High Strung) rises above as Prince Robert, the son of King Rowan, who meets and falls in love with Ella. The duo soon become important key roles in the film and its climax. These two always keep their acting and their chemistry together when it comes to musical, romantic films. Even though they keep their heads slipping, they always put their fairy-tale acting skills to the test for character development.

Actress and singer Idina Menzel (Disney’s Frozen, Glee) hoses down as Ella’s cruel stepmother who puts Ella to work and refuses to let her attend the ball, hosted by King Rowan and Prince Robert. As an actress and singer altogether, Menzel never ceases to amaze me (and her fans) when she is up for the challenge of appearing in musical films, even putting her hardwork and her acting pace into her levels of doneness. It seems though, Menzel made her own singing and acting just too easy as her early resume of singing and acting got her the gig in FOX’s Glee and the famous Disney animated film Frozen, for which she provided the speaking and singing voice of Elsa.

Actors Minnie Driver (Gus Van Sant's Good Will Hunting, Disney’s Tarzan) and Pierce Brosnan (James Bond films) are very noteworthy on their royal parts as Queen Beatrice and King Rowan, the latter of which still believes that following the king’s laws and regulations is the the right thing to do to continue the royal legacy and, certainly, he wants what’s best for his carefree son, Robert.

Cinderella is a fun-filled, remarkable live-action adaptation, clocking to almost two hours, but that is all there is to it. Kay Cannon, Camila Cabello, Idina Menzel, and Nicholas Galitzine really fit the bill all together in their parts and so does the rest of the actors and crews. This musical is a must. I know it’s not a Disney film as you’re expecting but this is something we can take pride and appreciation to enjoy when it comes to seeing musical films based on fairy-tale stories we look up into. It’s a task that we should do instead of going back to only Disney musical films for the time being. So, kudos to the director, the producers, and Camila Cabello who have made this all possible.