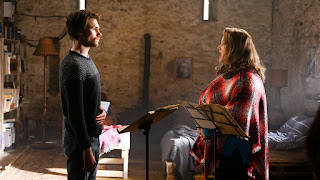 Falling For Figaro sings to a higher note but fails flat.

Learning about opera films can be quite a boring choice to select, much like selecting a musical film or a Broadway show to watch but with difficult issues to experience depending on who you are. It takes a lot of knowing and growing to see how opera films worked on certain levels. Even for opera and musical fans, this film like other opera films will stand in the way of people's eyes, voices, and hearts. Ben Lewin takes the stage as director to helm this feature film.

Falling For Figaro follows a young woman named Millie who desperately leaves her unfulfilling job as a brilliant young fund manager and long-term boyfriend named Charlie to chase her lifelong dream of becoming an opera singer ever through the streets of London and Scotland. There, she meets her opera instructor Meghan and a fellow opera student Max while in training, and what begins as a rivalry develops into something more.

Actress Danielle Macdonald portrays Millie, a smart fund manager whose main desire is to become an opera singer while supportive actress Joanna Lumley stands on the practice floor as Meghan, a strict-opera instructor who abuses but guides Millie on the way to become the perfect opera singer. Throughout the film, English actor Hugh Skinner comes into the scene as Max, another struggling opera singer and a rival-turned-love-interest to Millie.

With Ben Lewin’s direction, the story of this film bears a striking resemblance to the 2014 film Whiplash due to the plot and the main two characters between an ambitious music student and a strict-mistakeless music teacher. Lewin really nailed down the basics on operating heavy camera machinery on the two opera singing characters while trying to find the perfect balance on the characters. While filming Macdonald’s opera-singing scenes can be quite strenuous, Lewin, Macdonald herself, and the filming crew gather much arduous ovation towards the cast and the filming crews. They both know doing this requires lots of effort, commitment, and dedication to shoot various of brightful, beautiful singing skills throughout the film from start to finish and around the background.

The editing, the musical numbers, and the performances from Macdonald, Skinner, and Lumley are flawless and very spot on to keep the plotline nice and smooth, but some performances and scenes fall flat straight through. The crew also throws some adequate punchlines to orchestrate heavy musical artistry and the divine choreography coming from Nic Lawson and music composer Cezary Skubiszewski.

Falling For Figaro is a good movie, but falls flat on some parts of the scenes. However, the main acting trio and the filmmakers never ceased to amaze me. I enjoyed every musical number they sang which builds up the intention of being an opera film, meeting the basic requirements on how to craft this modern soap opera with the essences of 19th and 20th century modesty. This film is ok, whether or not you’re an opera fan. If you love opera, then you will love it, I guarantee this is worth the price of admission.