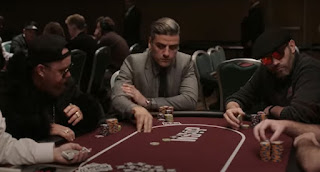 The Card Counter is an easy win-win.

Gambling and poker films are extremely hardcore, especially for sports fans out there who loves watching sports on national television and playing games at home or elsewhere. Director and writer Paul Schrader sits in front of a poker table as director while his frequent collaborator Martin Scorsese serves as executive producer of the film. The film features the camera-focusing quartets of Oscar Isaac, Tiffany Haddish, Tye Sheridan, and Willem Dafoe.

The Card Counter focuses on William Tell, a military-serviceman-turned-gambler who was haunted by his dark past and sets out to reform a young man seeking revenge on a mutual enemy Major John Gordo from their past. As he wanted to focus on playing cards, his existence that lies on the casino trail is shattered to pieces when he is approached by Cirk, a young, vulnerable detective who seeks assistance to execute his plan for revenge on a military colonel.

Golden Globe nominated-actor Oscar Isaac (Coen brothers’ Inside Llewyn Davis) calls the front poker booth as main character William Tell, a former military interrogator who is now a professional gambler, while Tiffany Haddish (The Carmichael Show) steals the spotlight as La Linda. As an actor in this poker film, Isaac keeps his eyes open as William Tell for any luck and chances that come and go, especially when he turns his head towards something he encounters, like his dark past and his onscreen glorifying chemistry with Haddish’s La Linda that puts his test of love and redemption while setting his poker skills aside. This is what makes the movie interesting to see thanks to Isaac and Haddish as they both know what to do when acting in crime films and drama films, even adding some comedy in the background.

Paul Schrader is the sole director of the film. He’s been in the movie business since he frequently works closely with Martin Scorsese as a fellow writer and producer. His Scorsese-collaborated films include Taxi Driver, Raging Bull, The Last Temptation of Christ, and Bringing Out the Dead. He also directed his own, such as Blue Collar, Affliction (also featured Willem Dafoe), and First Reformed, the latter of which got him nominated for Best Original Screenplay Oscar, his first Oscar nomination in his career.

As director, while Schrader pays much attention to Oscar Isaac winning poker in the poker series, he keeps the cast going from shooting fun-filled casino scenes and games to supplementing darker, brutal images in the prison center displayed in the film with a side of disturbing contents flowing through space. Schrader captures on how any film or scene that can be as horrifyingly-violent or visual-graphically brutal as if he treats this film not only as a crime-drama film, but also as a gangster-mystery movie to define its own Martin Scorsese glory. It’s a skill he, as an aspiring filmmaker, majorly took heavily influence on while directing and producing films on-and-off.

Actor Tye Sheridan (Ready Player One) tags along with Isacc and Haddish as Cirk, a mysterious young man who oversees Tell’s poker-playing talents while actor Willem Dafoe (Spider-Man, Finding Nemo) plays his small, but major role as Major John Gordo, a corrupted military leader and a hidden antagonist in the film despite having some small screen time from beginning to end.

I hate to admit it, I’m not a huge fan of Paul Schrader nor Martin Scorsese when it comes to loving movies and studying about them, but The Card Counter is good, maybe not the best, just an interesting movie in that matter, clocking in at 113 minutes. It’s an enjoyable piece for adults only, possibly for poker players and poker fans out there. My main advice is, someday, when you play your cards right, you will definitely get a good kick out of this film. The director and the four main cast did a terrific job, though I really wish Dafoe would get more camera-playing focus just to have more information about his character. Nevertheless, this is a film you should watch, but I highly recommend that you need to proceed with caution when selecting this flick.