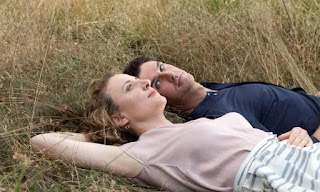 In director Maria Schrader’s “I’m Your Man,” Maren Eggert stars as Alma, an expert chosen to evaluate the use of robots as a replacement for romantic partners. Using information about her, the unnamed company creates what they consider to be her ideal mate – Tom (Dan Stevens). The movie begins as if Alma and Tom are meeting on a blind date. Alma arrives at a nightclub and is greeted by a host (Sandra Huller), later revealed to be an employee (the character is also credited as Employee) of the robotics company and case worker of sorts for Alma and Tom.

Employee guides Alma through the intimate club as loud jazzy music plays while couples sway on the small dance floor. Alma is reluctant in her meeting with Tom, obviously uncomfortable with the situation. The character’s emotions are perfectly portrayed by Eggert, showing her hesitations while questioning the authenticity of Tom. Alma’s experience remains uncomfortable as Tom brings her to the dance floor, soon starts glitching and is quickly removed. Employee promises Alma this is a rare occurrence (similar in probability to winning the lottery) and to return the next day to pick up Tom and start her evaluation.

Even after picking him up, Alma continues to have a stand-offish attitude toward Tom. She’s opposed to allowing him into her life. Stevens does a great job as Tom. He presents the robot as something close but just not quite human. There are odd tics and reactions (or lack of reactions) that continue to prove that he’s not flesh and blood. Although his appearance is convincing to the general public, there’s just something slightly off about him. Oddly enough, no one ever questions his humanity even when they are questioning his odd behavior.

“I’m Your Man” is really a movie about emotional connection. Alma’s task is to keep Tom for three weeks then give her opinion on the use of robots as romantic partners. What’s most interesting about Alma is that she’s not interested in a relationship of any sort which makes you question why this company would allow her to test their product. It’s a set-up that works (and makes for a more interesting film) but doesn’t quite make sense. As Alma interacts with Tom, she finds herself warming to the relationship. Can an AI be a fulfilling replacement for a human mate? Is this just emotional manipulation?

While the pacing gets kind of clunky in some parts, as a whole, “I’m Your Man” is an enjoyable sci-fi feature. Although the film’s main concept has been explored recently, “Her” and “Jexi” come to mind as two examples (of varying quality) from the past decade, it does offer good performances from its stars. Overall, it’s not the most original piece of filmmaking but there is some appeal, making this worth a watch.
(Review by Bret Oswald)