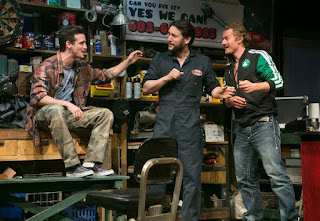 “Small Engine Repair” is the type of movie that works best when the viewer goes in completely blind. I almost managed to pull this off and really wish I had (the movie’s trailer kind of spoils things). Writer/director/star John Pollono’s film, based on his stage play, is about the relationship between three childhood friends – Frank (Pollono), Swaino (Jon Bernthal), and Packie (Shea Whigham) – now adults who have further bonded over the raising of Frank’s daughter Crystal (Ciara Bravo).

The film begins with Frank getting out of prison and going to pick up his young daughter (Nina Peterson) from his pals. It’s obviously been some time since Crystal has seen her father because she is reluctant to leave the caring arms of Swaino when her father arrives. But, this isn’t a movie about a father attempting to win back his daughter’s affections. This opening serves to start building the characters’ history and spell out Frank’s troubled past.

Jumping forward, Crystal is now a senior in high school (played throughout the rest of the movie by Bravo) living with her father. Her mother, Karen (Jordana Spiro), is still in the picture, but the relationship seems strained. While Karen takes Crystal Christmas shopping, Frank and his friends go to a bar. At the bar, Swaino and Packie get into a fight which leads to Frank joining in and losing control. This event leads Frank to decide to cut Swaino and Packie from his life. The majority of the movie takes place three months after the bar fight when Frank mysteriously decides to call Swaino and Packie together for a hang-out at his shop.

Upon viewing “Small Engine Repair,” viewers will not be surprised to learn that the film is based on a play. The story essentially boils down to three scenes – the opening scene, the scene at the bar, and the scene in Frank’s shop – and most of the film’s action is dialogue heavy. Past events are shown, but they are shown with voiceover as one of the men tells his memories to the others.

For most of the runtime, the movie feels directionless. It’s more of a character study than anything; there’s no apparent plot. The actors are completely natural and at ease in their roles. For the most part, their relationships feel well established, although Swaino and Packie’s relationship is a little vague (probably purposefully so). It felt like there was more to be explored between those two. The world these characters inhabit feels “lived in” and not part of a production, enhanced by the cold and grim photography from Matt Mitchell.

I can imagine this is the type of movie that many audience members will find boring but there is a purpose for each scene and it all builds to a final act that’s shocking but within character. Here things take a turn to a harsher reality for all the characters. It may seem aimless for far too long but, for those viewers willing to stick around, there is a payoff following the buildup.
(Review by Bret Oswald)