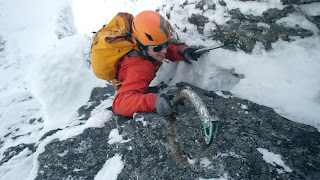 The Alpinist, is just a fun, documentary flick despite having a PG-13 rating on their hands. No Earth-shattering dynamics, just a good time watching a story about a man who wants to fulfil their dream based on what their heart desires. It is a similar experience teaching people to go and do great things regardless of who they are, they still have a bright dream and future as they overcome their fears and problems to inspire many people. Having been directed by Peter Mortimer and Nick Rosen, the film will also include some interviews from Marc-André’s family and friends, explaining about their relationships with him, his climbing routes, and his perseverance and struggles.

The Alpinist follows the story of a young, free-spirited 23-year-old climber Marc-André Leclerc who makes his way to some of the boldest solo ascents in history. Because of this, he draws scant attention. Though the problem for the shy climber right there is that he doesn’t have a phone or a car for his climbing solo outings. With no technologies, ropes, or any necessaries on hand for his climbing goal, Leclerc's approach becomes the essence of his solo adventure.

The main directors in the film are Peter Mortimer and Nick Rose. Mortimer and his filming crew filmed and shot some scenes for Marc-André’s climbing journeys somewhere in Canada, even with or without Marc-André’s approval. Mortimer’s experience of filming Marc-André’s high climbing seems to be difficult as the process of filming someone climbing is considered a risky and dangerous move for one’s safety and extracts many concerns for future mountain climbers and eskimos. Of course, this is a documentary movie, but it’s also filled with nervousing-intense images for anyone who wants to conquer that goal. Filming all over the mountains and heights may be a steadiest pace and chore task, but Mortimer and his documentary crew want to make this film a simple good documentary under Marc-André’s wishes himself.

The Alpinist is a good 90-minute documentary. It really sets the stage on how any average documentary films about how a person can fulfill their ultimate goal and how one has touched other people's lives. A goal is centrally what the main characters or real-life people should aim for. That is what the audience and movie-reviewing members pay to see, read, and listen. You should give this a go. The director and the crew out done it. It is kind of a nudge and a wink-of-the-eye to the audience since, if all goes well. Who knows, maybe this might be your last meal before you go out hiking and climbing. And if you think about it, take those words “anything is possible” for your own take on films and your future.