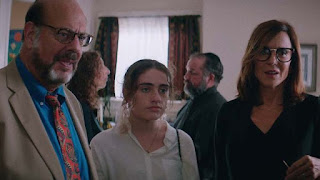 Shiva Baby focus on the bisexual college student name Danielle who runs into her sugar daddy Max and her ex-girlfriend Maya at a Jewish funeral service with her parents. Though, her main problems are that Max is married and her mother hardly asks questions about her disorganized life as her anxiety rapidly increases.

Actress Rachel Sennott portrays Danielle, a college girl who has an unknowingly crush on Max while Molly Gordon (TNT’s Animal Kingdom) appears as Maya, Danielle’s ex-girlfriend. Sennott and Gordon are very wonderful in their roles, providing some good advice on friendship and relationship, even for LGBTQ characters. Their chemistry on their performance and their behalf slowly entertains one viewer (or movie critic) to another.

Thanks to Sennott’s serious acting, from the perspective of her protagonist-role as Danielle, everything in the film under the director’s directing bloodline, just to watch her uncertainty of where her life is going that maniacally leads to plenty of strange miscommunication, nervous breakdowns, and amusing moments. The performers' delivery from that script is purely great with a side of huge relief, which is particularly meant for comedies and dramas around the house, but one can fall flat if the delivery isn't perfectly in-sync with the screenwriter's intent. There are plenty of indie comedies with decent scripts that lack convincing dialogue delivery. This highly-tension builds along with the intensity of the score and the suffocating on the way the shots are composed. The grinning faces of Danielle's are occasionally framed in a way that they appear comically (and cringeworthy) menacing.

Based on her short film produced in 2018, Shiva Baby is more of a comedy-thriller film with claustrophobia being featured as a mindful protagonist for the main character and serves as Emma Seligman’s first-time feature film as director. Seligman had the bright idea of creating a film that teaches people about sexual issues, the messages of claustrophobia, the themes of LGBT, and women empowerment, even through camera shots, intense music compositions, and relationship chemistries. Her role in the film quickly paved her way as a good start-up to her film career. If this makes the case, she would have been landing on top like other A-list female directors in Hollywood.

Also featured in the film are Fred Melamed (A Serious Man) and Polly Draper who appeared as Danielle's parents Joel and Debbie while Danny Defarrari and Dianna Agron (FOX’s Glee) portrayed as Danielle’s sugar daddy Max and Kim, whom they have been married and they now have a baby.

Shiva Baby is a great film, maybe exceeding on its levels of highly-class entertainment, despite being a 78-minute movie. The director and the performances from Sennott and the cast have done a great job. I'm always into good comedies and dramas out there when the year has to offer, which is very hard to come by, but this film is pretty powerful to watch and is worth the time for your amusement.

Posted by Dallas Movie Screenings at 11:15 AM