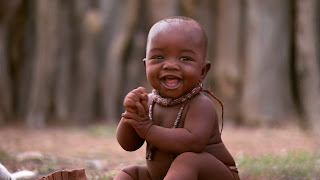 Four babies from different parts of the world is the focus of this entertaining and beautiful documentary on how we raise and nurture our little ones. Director Thomas Balmes and his crew offer a window in the lives of these families from Mongolia, Africa, Japan and the US. There is no dialogue or commentary to this film, only the camera aimed at the babies doing what babies do best.

Ponijao is from Opuwo, Namibia a village where the people raise goats. They live in huts with dirt floors, flies everywhere, and people with little to no clothes. They are decorated in beautiful beadwork necklaces, leg bracelets and belts. They use red ochre to clean themselves and a knife to cut their hair. Babies crawl around in the dirt. There’s stillness in the way the mother and the female family members care for their young. Mothers offer a breast for nursing whenever there’s a need. Bayar(jargal) is from a nomad family in Mongolia. They also raise goats and cows. In Mongolia they tie their kids in papoose like bundling. He was held in his mothers’ arms on the back of a motorcycle across the wide open rolling plains of their lands. Bayar grows exploring his world being close to the earth, the vast horizon and sometimes tormented by his older brother in typical sibling fashion. Mari is born in Tokyo, Japan. And Hattie is born in San Francisco. They have an urban upbringing filled with the best of everything to stimulate their small motor skills. Their mothers take them to classes, and expose them to zoos, and stores. Despite these benefits that would be considered normal by most people, the babies all share a common unifying factor; the love of their parents, and careful attention to their development.

It’s been said that babies are cute as mother nature’s way of keeping their human parent from abandoning the child. As a mother it’s hard to resist the beauty of these babies. Balmes’ camera’s effectively captured the unique journey each child takes in their exploration of their world. The lack of narration only enhances the universal language of who we are as a species. Our offsprings are our future. It’s up to us to create an environment that is safe and healthy so that our children will survive.
(Review by Reesa)

Posted by Dallas Movie Screenings at 2:43 AM