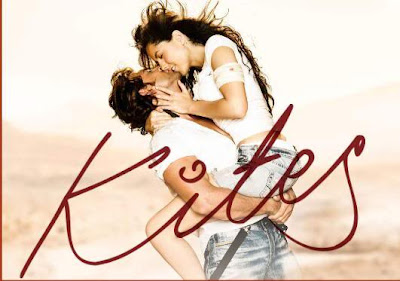 An injured young man is found on a train with a bullet in his back. He’s nursed back to health by a local rancher. When he recovers he walks back into the desert searching for the love that he had lost. Exhausted and thirsty he stumbles upon a small train station which prompts the memories of what happened to him. He finds his phone by the tracks and asks the station master to charge his phone before he collapses. He’s awakened later when the station master says he’s called his friends to come fetch him, except those cars pulling up are filled with gunmen.

J (Hrithik Roshan) is an unlucky opportunist living in Las Vegas. It seems he’s always at the airport when his ship comes in. He survives by doing multiple jobs like selling popcorn, running scams, marrying women so they can get a green card and teaching dance classes. At one of his classes he flirts with a beautiful young woman Gina (Kangana Ranaut) who misinterprets his attentions. She manages to gain entry to his apartment where she proceeds to assume that they are a couple. When he angrily throws her out, he quickly apologies and reconsiders when he discovers that she is daughter of a casino owner. His ship has finally come in. That is until he discovers that Gina’s brother’s Tony (Nick Brown) has a fiancée Natasha (Barbara Mori) who was J’s latest immigrant wife. She made a lasting impression on him and he didn’t forget her. The two couples spend time together, but he can’t keep his eyes off of Natasha. As J becomes ensconced in the casino owner’s family he’s made privy to the gangster like dealings of their business. He also sees how badly Natasha (aka Linda) is being treated by Tony and realizes that he can’t deny his love for her. On the eve of Tony and Natasha’s wedding, J takes her out on the town to prove his affections. When they return to her apartment, a drunken Tony is waiting. They knock him out and are on the run when the gangsters, the cops and some bikers are after them when it’s reported they also stolen 2 million dollars from the casino.

This is not your typical Bollywood film directed by Anurag Basu and produced by Rakesh Roshan. There’s a mix of thriller, romance and action as well as some musical sequences, but not breaking the context of the scene. The movie is a cross over of Indian Bollywood and Spanish Novella. The actors in the film are incredibly attractive with Hrithik Roshan’s most amazing eyes that are rimmed in green, hazel and red around the pupils, plus killer abs. Mexican soap opera star, Barbara Mori is stunning as the Mexican love interest. The camera lovingly caresses them at every opportunity as they gaze into each other’s green eyes. There is an over abundance of slow motions shots, close-ups, underwater scenes, rain, rain and more rain. The dialogue is a mixture of Hindu, Spanish and English often at the same sentence.

It’s a long running time for the film at 130 minutes, with a shorter version, Kites:the Remix, will also be released. With less music, and subtitles and more action it will probably work better for the multiplexes as American audiences may not sit still when power ballads play while the lover chastely frolic, but will enjoy the car explosions and gun play. Kites has a little bit of everything and a lot of over the top romance.
(Review by Reesa)

Posted by Dallas Movie Screenings at 11:26 AM