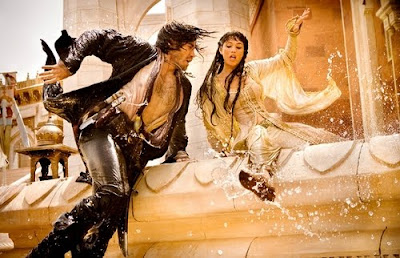 King of Persia rules his ancient kingdom with his brother who had saved his life when they were children. One day the King witnesses a young street urchin come to the rescue of another boy who got in trouble with the King’s soldiers. The King is impressed by the boy’s bravery and loyalty. He adopts the homeless boy and raises him as a prince with his two biological sons so they would not fight over the throne.

The kings’ brother Nizam (Ben Kingsley) tells the oldest prince that the holy kingdom of Alamut is secretly producing weapons to fight the Persians. Consulting with his brothers and uncle in the absence of his father the King Sharaman (Ronald Pickup), the prince decides to invade despite Dastan’s misgivings. Dastan (Jake Gyllenhaal) the adopted son and a bit of a rogue, goes against his brother’s orders and attacks the fortress from the rear while the defending army is protecting its front. He gets a door open and the Persians defeats the Alamut.. In the temple Princess Tamina (Gemma Arterton) who is renowned for her beauty slips a wrapped package to a trusted soldier charging him to bring it to safety. When the messenger is killed Dastan gets hold of the crystal handled knife. The magical dagger has the power to transport the holder back in time. The Princess is the guardian of the secret mystery of the sands of time. When the King is murdered, Dastan is framed for the crime and the Princess aids his escape to get the knife back from him.

Based on the popular video game, The Prince of Persia, the various forces chasing Dastan and the princess across the desert encompasses most of the movie. The attractive couple spar and bicker while fighting an obvious attraction to each other. The wild special effects include some nice parkour elements across rooftops, there’s a race on ostriches, there’s the swirling sands of time, and of course battle scenes. Director Mike Newell (Harry Potter and the Goblet of Fire) keeps things moving without much fright and gore. You don’t have to have played the game to enjoy the movie. It takes some game elements, but the movie stands on it’s own. Gyllenhaal makes a nice looking prince, and he takes off his shirt to flash and flex the buff bod. But it’s Gemma Arterton who is the more interesting character and she makes the most of her time playing off the unusually bland Jake. Alfred Molina steals the scenes as the rapscallion Sheik Amar who runs this desert town with races and shady criminals. The Disney machine with Bruckheimer producing would probably like to see this become a long running series. It wasn’t horrible, and often times enjoyable, but not quite memorable.
(Review by Reesa)