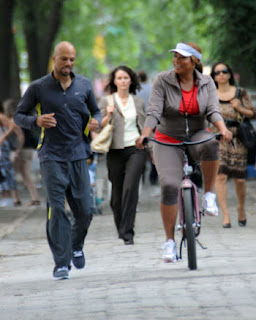 Lesley Wright is a 35 year old single woman who just can’t find a relationship. She’s got a good job, just bought a house that she’s fixing up, lets her god-sister stay for free and drives this beat up old car because her grandfather gave it to her. She’s a good person with whom men just want to be friends.

Queen Latifah embodies Lesley Wright with a good attitude about her situation in life. She’s happy working at a physical therapist. Her mom (Phylicia Rashad ) is helping to decorate and dad (James Pickens Jr) is attempting to make home repairs. Morgan (Paula Patton) is temporarily staying with Lesley as she formulates her plan in life to “bag” a ball player as a trophy wife and get her own brand. Lesley is amused by her god-sisters shallow outlook on life. They go out to a basketball game with Morgan dressed to the nines to attract the players. Lesley dresses like the fan that she is with the New Jersey Nets t-shirt and yelling from the stands. Morgan takes off when she hears there’s a party being given by the Nets Star Scott McKnight (Common) and her friends want to find out how snag an invite. Lesley stops at a gas station on the way home and McKnight driving a big fancy car drives up, and he’s clueless as to where the vehicle’s gas tank is located. In her unselfconscious way, and excited like a fan, she helps out McKnight who is grateful and invites her to the party the next night. When Lesley tells Morgan and asks her to come along, Morgan kicks her master plan into action. Using what little information she culled for Lesley’s brief conversation with McKnight, she manages to peak his interest and the next thing you know they are engaged.

McKnight has a serious injury during a game which will require intensive therapy if he’s going to the playoffs and having his contract renewed. Morgan recommends Lesley. With the chance that McKnight may no longer be able to play basketball, Morgan leaves him a note and takes off. Lesley must not only heal his torn knee, but also build up his confidence. In the process the expected is bound to happen between two people working so closely to each other. Until Morgan comes back into the picture once McKnight is healed, but will he make the Wright choice?

Director of the Sisterhood of the Traveling Pants 2, Sanaa Hamri and writer Michael Elliot have created a story about women that doesn’t sexualize them as objects. Morgan is beautiful and selfish which foils the level headed Lesley. Queen Latifah does basically the same character in his movie as she’s done in her past romantic comedies. And she has some really good chemistry with rapper/actor Common. Its nice seeing women who have a more substantial physical presence be viewed as romantic leads instead of the just the loud best friend with the heart of gold. The real life basketball players cameos which will attract the men to attend this date movie are the only stiff and uncomfortable performances in the film. It helps to attend a screening with an audience that is thoroughly invested and react with verbal enthusiasm. Otherwise it’s just another 2 hours that you will forget about and get on with stuff.
(Review by Reesa)