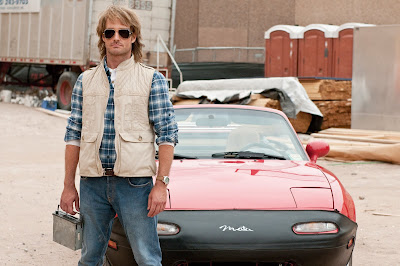 MacGruber had dedicated his life to fighting crime with his bare hands. He had honed his skills as a Green Beret, Navy SEAL and Army Ranger. But in the 10 years since his fiancée was killed, Special Op MacGruber has sworn off fighting until General Faith calls him on a special mission to find MacGruber’s nemesis Dieter Von Cunth who has stolen a nuclear warhead.

Mullet headed MacGruber (Will Forte) may be like the 1980’s MacGyver hero but he’s dangerously inept. In the Saturday Night Lives skits he basically kills his team with each mission. The expanded version of the movie doesn’t rehash the same routines. MacGruber’s former boss General Faith (Powers Boothe) wants him to track down Cunth (Val Kilmer) using his unique skills. We are to believe that MacGruber had won countless medals and purple hearts, is an expert in martial arts and bombs but he doesn’t use a gun, preferring hand to hand combat. Joining him is a rookie military officer assigned to over see the mission straitlaced Lt. Dixon Piper (Ryan Phillippe) and Vicki St. Elmo (Kristen Wiig) his old partner. Vicki is a former operative with MacGruber, but quit to launch a career as a singer. The dastardly Dieter Von Cunth had previously killed MacGruber’s wife Casey (Maya Rudolph) on their wedding day.

MacGruber is like the guy in Get Smart that doesn’t necessarily get a job done on his own, but through a series of misadventures and mistakes. His methods are unorthodox and inane like the scenes with the celery stick which can’t be described here. Will Forte and Kristen Wiig play characters stuck in their heyday of the 80’s. But they are such accomplished comedians they are able to show MacGruber almost in a sympathetic light. This is a feat in itself as MacGruber is self-righteous, a coward, vain, petty, immature, homophobic and delusional. There’s really nothing redeeming about him. Yet the other characters are playing it straight around him and because of that it works for the most part. If this was a Will Farrell movie, I would have just left annoyed.

Written by Forte and the SNL writers John Solomon and Jorma Taccone (who also directed the film) keeps the pace light. I was unfamiliar with the skit before seeing the movie. SNL’s reputation for having hit or miss comedy routines wasn’t an encouraging factor on seeing it. But I was surprised that such broad comedy would illicit fits of giggles. I probably won’t remember any of the gags, except for maybe celery sticks
(Review by Reesa)

Posted by Dallas Movie Screenings at 12:24 AM