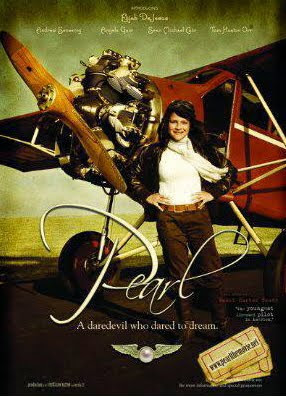 Pearl Carter who in 1928 lives with her family in Marlow, Oklahoma sees an airplane for the very first time when one lands in her father’s field. In that moment her whole life had changed.

George Carter (Andrew Sensenig) and his Chickasaw wife Lucy (Angela Gair) have 3 daughters and a son. Pearl (Elijah DeJesus) at 12 years old has the responsibility of driving her father to work and on his business trips as he is blind. Despite his disability he is very successful and fosters the belief to his children, that you can accomplish anything if you try hard enough. When soon to be renowned aviator Wiley Post lands his plane on her father’s land, Pearl begs her father if she could ride in his plane. Her excitement and enthusiasm is hard for him to resist despite Pearl being grounded for previously being too out of control. Pearl falls in love with the feeling of flying. She loves the freedom it gives her. Wiley likes her spunk and willingness and tells George that she may have the aptitude to be a pilot. George decides to build Pearl an airplane hanger and get her an airplane. Wiley finds her a flight instructor who is hesitant about her age, until he sees what she can do. By the time she’s 14 Pearl is flying her first solo. Her father manages to secure her a flying license by saying she’s taller than she really is and 2 years older, much to the chagrin of the mother. Pearl flies at air shows and pilots her father and others for business trips. Soon she becomes a local celebrity for being the youngest airplane pilot in the country.

A couple years later she meets Scottie, a local farm boy and catches his attentions. They quickly become very close. Worried that her father will disapprove, she and Scottie elope just as her older sister had done. Apparently in those days it was acceptable for teenagers to run off and get married. But these are also during the years of the great depression and times are tough. Scottie has trouble with Pearl still barnstorming at the air shows. He believes she takes too many chances now that she’s married with a child.. Eventually she reconnects with her family and has to decide what’s more important in her life, flying or raising her children.

King Hollis directed this feature by Thomas Bailey, Donna Carlton, and Margaret Reynolds with the slow pacing of a Lifetime Channel TV movie. The true story of the inspiring young woman will work for young girls with aspiring dreams. Young women did not have that many options for their futures besides getting married and raising children to help work their farms. Her abilities and desire for someone of her age, during the late 1920’s, and in such a small town is remarkable in itself. It’s just a little convenient that she was able to do these things because her father was well to do enough to build her a hanger and buy her a plane. It also would have been nice if they included her meeting with famed humorist Will Rodgers through Wiley Post. Rodgers and Post were both killed when Post’s aircraft crashed in Alaska. For local films, it’s nice discovering a story so little known produced by the Chickasaw Nation.
(Review by Reesa)

Posted by Dallas Movie Screenings at 1:50 AM