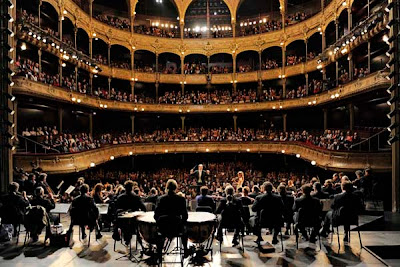 The janitor at the Bolshoi Orchestra Theater interrupts a rehearsal with his cell phone. He is told that he cannot watch rehearsals until all his work is done and that includes cleaning the manager's office til it shines. While in the office a fax comes in which the janitor intercepts. It's from a major French theater that wants to hire the Russian orchestra to fill in when the Los Angeles Philharmonic could not make the concert date in two weeks. The janitor steals the notice.

Thirty years earlier, Andrei Simoniovich Filipo (Aleksei Guskov) was a reknown conductor for the Bolshoi Orchestra. In the middle of the a performance of Tchaikovsky Violin Concerto in D Major the manager of the Bolshoi and a big wig in the ruing communist party interrupts to declare Andrei a traitor for hiring Jewish musicians. Andrei was completely broken after that incident. But with this fax in hand he plans to get the old orchestra back together and play that date in France. With his best friend, cellist Sacha Grossman (Dmitri Nazarov) they talk the man who ruined his career in the first place, Ivan (Valeri Barinov) the former KGB who still dreams of communist comeback to manage the orchestra. Despite their differences, Andrei believes he's still the best orchestra manager for this job.

The former musicians of the Andre's fired orchestra have found work doing various things over the years and some have not picked up their instruments since that infamous day. The prospect of going to France gets them to sign on even though they only have 2 weeks to get this all together. Ivan is making demands on the promoters based on this memories of France 30 years ago, like dinner at this restaurant that is no longer there, a cruise on river and a hotel that has since lost it's 4 star rating. Andrei and Sasha enlist the help of the gypsy band of their violinist to get them clothes, shoes, instruments and even illegal passports to get them to France. When they finally get out of the country, the musicians demand their per diem then scatter. They don't even show up at the rehearsal. Andrei covers with an explanation like in the Music Man where the music comes from within and the music is purer when it's spontaneous. Eventually they have to be tracked down when the star violinist soloist Anne-Marie Jacquet (Melanie Laurent) threatens not to perform.

Romanian-born director Radu Mihaileanu makes the French look like buffoons and the Russians like opportunists. The gypsy's are a wild and crazy gang of thieves, there are Russian gangsters and Jewish con-men. It's not exactly a wacky comedy as the trailer implies, but there are plenty of amusing moments with the improbable plot of getting a 55 members of the orchestra out of Russia and on the stage in France without anyone catching on they are not the real Bolshoi Orchestra. The best moment is the full concert of Violin Concerto in D Major. You do not normally see a full performance of anything in movies as it's always broken by plot scenes. That in itself is worth the ticket price and story is icing on the cake.
(Review by reesa)

Posted by Dallas Movie Screenings at 12:28 AM

Email ThisBlogThis!Share to TwitterShare to FacebookShare to Pinterest
Labels: The Concert Review