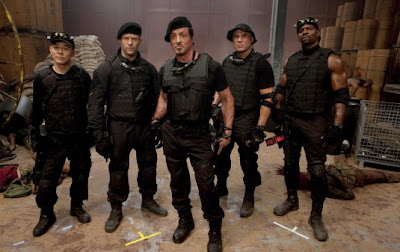 Somalian pirates had captured the crew of a freighter ship at sea. They are preparing to broadcast the execution of the crew as their ransom demands have not been met. Before the leader could make the fatal blow laser sites dot their bodies. Mercenaries have arrived with 3 million in a sack. The pirates demand for more money makes one the of the rescue team angry enough to start shooting. Soon there is no one left standing except for the captured crew.

The team known as The Expendables is a loose group of older and experienced men who know how to get a job done under the radar of government oversight. They are led by Barney Ross (Sylvester Stallone). They receive a job by a shady CIA agent (Bruce Willis) to go into a gulf island country to overthrow a ruthless dictator. Arnold Schwarzenegger shows up in a brief scene as another contractor who turns down the job and trades quips with Sly's character. Once in the fictitious country Lee Christmas (Jason Statham) and Ross discover there is something more sinister underfoot when they meet Sandra (Giselle Itie) who happens to be the daughter of the corrupt General Garza (David Zayas). He's in ca-hoots with ex-CIA agent James Munroe (Eric Roberts) to enslave the populace to produce drugs. Ross doesn't want to get involved with cleaning up a CIA mess, but feels almost guilty for leaving Sandra and her idealism to save her country. Munroe gets inside info on the team from just ousted Expendable Gunner (Dolph Lundgren) who was kicked out for being hot headed, unreliable, and on drugs. Car chases and fights ensue until Ross decides to go back and do the right thing. The team also includes Jet Li, Randy Couture, Terry Crews.

This answers the question of what happens to action movie stars once they have passed their prime. They write and direct movies for themselves to include a beefy muscled cast to kick major butt. Sylvester Stallone wrote this with Dave Callaham (Doom and Horsemen) with dialogue that's stiff, wooden and often cringe-worthy. You have to go into this movie not caring if there is story or plot and just to see things blow up. There are moments where they must have improvised some of it because it's hard to believe the lines were actually written on paper to recite. Especially the soliloquy by Tool the tattooist (Mickey Rourke)...pure cheese. This probably serves as the token romantic quite moment in the whole movie. Most of the scenes involve massive shoot outs with painted faced soldiers and spectacular explosions all of which are sped up in editing so you really can't see what's going on. Maybe even to hide the choreography of the fisticuffs. It's still fun and mindless. The AARP nudging action heroes still show they got the moves.
(Review by Reesa)

Email ThisBlogThis!Share to TwitterShare to FacebookShare to Pinterest
Labels: The Expendables Review