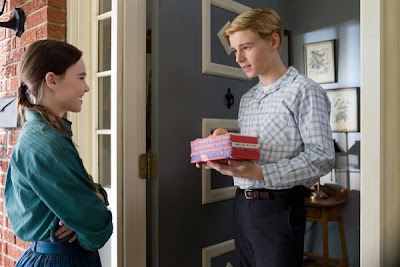 In the summer of 1957, 2nd grader Juli Baker introduces herself to the boy moving in across the street. She is immediately struck by his “dazzling eyes”. Bryce Loski isn't all that impressed with his aggressive new neighbor. While she is trying to make him feel comfortable at school, he is doing everything he can to practice “strategic avoidance” to get out of her line of affection. Years later, the tables are turned as he becomes “flipped” and actively peruses her.

Juli( Morgan Lily-young Juli and Madeline Carroll-older Juli) has low-income parents who are renting their house. The dad (Aidan Quinn) and mom (Penelope Ann Miller) are the loving parents of Juli and her talented vocalist twin brothers. They don't have much money because they support her dad's special needs brother who is institutionalized. Their yard is a mess and Juli raises chickens and sells the eggs to the neighborhood. Bryce's disgruntled dad (Anthony Edwards) is opinionated while his mom (Rebecca De Mornay) is the Susie Homemaker who keeps things running evenly. Bryce's grandfather (John Mahoney) is also living with them. Teenage sister Lynette (Cody Horn) hangs out with the Baker boys and their music. Juli shows lots of spunk like trying to save the big tree at their school bus stop, raising chickens and eggs, and cleaning up the yard befriending Bryce's grandfather in the process. Bryce (Ryan Ketzner-young Bryce and Callan McAuliffe-older Bryce) on the other hand is one to make waves or stand up to what he believes. As they grow older Bryce begins to see Juli in a different light until he “flips” for her. By then Juli has decided she doesn't like Bryce as much as he deserves. Bryce's mother decides to invite the Bakers over for a sit down dinner and that's when the trouble starts.

Told in a “he said” “she said” style, Rob Reiner tells the story from Bryce and Juli's viewpoint. It's a cute concept that shows how differently we see events from our singular perspective. Small towns, the late 50's and early 60's , puppy love during an innocent era is something the Reiner does rather well. Based on the young adult book by Wendelin van Draanen, the film is full of rich detail and atmosphere of the times. Even the music is chronologically accurate and enhances those years before Vietnam. This movie could have been insufferably cute, but the talented cast and director keep the characters from being too Leave it to Beaver or the Donna Reed show squeaky clean. Today's teenager may not relate to the historical aspect of the movie, but will enjoy the universal appeal of awakening awareness of the opposite sex.
(Review by Reesa)