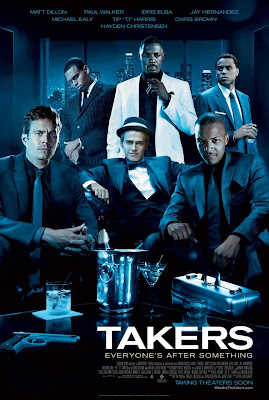 A crew of five bank robbers stage an well orchestrated bank heist in downtown LA raking in a few million. They only do one job per year investing their ill gotten gains in foreign banks and giving some to charity. Living the high life in expensive clothes, cars and homes they are careful and wary trusting only in each other. A former member of their team is released from prison with a plan to steal a mother-load of cash but it has to be completed in a few days. They are suspicious of the job, as it violates all their plans but it's a big haul and they are self professed “takers”.

LA dectectives Welles (Matt Dillion) and his partner Hatcher (Jay Hernandez) are trying to find clues to the bank robbery. Hatcher is a happy family man compared to Welles who is divorced and his quality time with his daughter involves chasing down a lead rather than taking her to the LaBrea Tar pits as promised. His single minded police work manages to get him a lead on the possible culprits. For such careful robbers a little hand gesture caught on tape catches the detective's eye.

The robbers are lead by Gordon (Idris Elba) who is distracted by a drug addicted sister Naomi (Marianne Jean-Baptiste) who was in rehab but suffers a relapse the 2nd day she's out of the treatment center. His second, John (Paul Walker) has a nice house and shows off his naked backside, but doesn't seem to have a back story. Jesse (Chris Brown) was brought to the team by his brother Jake (Michael Ealy) who just proposed to Rachel (Zoe Saldana). AJ (Hayden Christensen) rounds out the team and is Jakes' best friend. Ghost (Tip “T.I.” Harris) used to go out with Rachel and his oily best wishes to Jake should have clued them in to his bad intentions. Ghost had made a deal with some Russians for information on an armored car route. The plan involves blowing up a street. Chris Brown has a parkour chase scene which apparently he did without a stunt double.

There are 5 writers credited on IMDB including director John Luessenhop. The pacing and the serious tone could be considered Heat-lite as the dialogue and characterizations could be an extended episode of Law and Order. There is no true protagonist, no one to really sympathize with or care who ends up with the stolen gains. The action and the popularity of some of the cast will sell tickets, but really, you may walk away feeling taken.
(Review by Reesa)