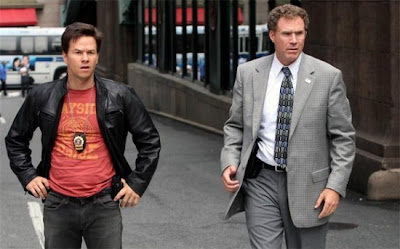 Two super cops are involved in a wild and crazy car chase with guns flaring. Highsmith (Samuel L. Jackson) and Danson (Dwayne “The Rock” Johnson) are what every typical movie cop buddies want to be. They are so confident and out of control, but they always bring in the bad guys no matter what the cost in damages. They are such heroes they don't even do their own paper work because it's too dang boring.

In their precinct there's the hero cops and the “other guys” like Allen Gamble (Will Ferrell) a mild mannered transfer from forensic accounting desk jockey and Terry Hoitz (Mark Wahlberg) a once ambitious detective who is living down a huge error at a Yankee's game making him a laughing stock. Gamble is good natured to Hoitz's constant anger and harassment regrading his masculinity because he would rather work safely at his desk then on the streets. Gamble is so clueless he manages to have his gun replaced with a wooden replica by his boss, Captain Gene Mauch (Michael Keaton). When Highsmith and Danson make a tactical error when on a case, the rest of the department's teams want to step in their place. Hoitz has to pull a gun on Gamble to get him on the streets. Gamble justs wants to investigate a white collar crime involving scaffolding. They are denied a patrol car and have to ride around in Gamble's bright red Prius. There's a running gag about the Prius and some homeless group party for the gross factor. Every attempt they make doesn't turn out as well as they hoped. They do manage to arrest David Ershon (Steve Coogan) for the scaffolding scam, but the rich investor has other problems when he's kidnapped from their custody. Captain Mauch takes them off the case but Gamble and Hoitz want to figure out what's going on.

Director/writer Adam McKay has written for Saturday Night Live and directed Will Ferrell in Stepbrothers, Talladega Nights and Anchorman. Ferrell's usual zaniness is slightly and fortunately tempered in this with Wahlberg as his straightman. Hoitz's meeting of Gamble's hot wife Shelia (Eva Mendes) is probably the best bit in the movie. And Keaton as the moonlighting Captain makes one wish to see him in more comedic features. The plot involving investment funds was a bit complicated but not really necessary to understand. Most of the movie is like a long SNL skit with that same hit and miss quality of the TV show. It would have been nice if the energy generated with Jackson and Johnson at the beginning of the movie could have been sustained though out. Instead we are stuck with “the other guys”
(Review by reesa)

Posted by Dallas Movie Screenings at 12:24 AM

Email ThisBlogThis!Share to TwitterShare to FacebookShare to Pinterest
Labels: The Other Guys Review